Kawah Ijen is an active volcano situated on the Eastern side of Java, Indonesia. Standing at nearly 2800 metres high, it last erupted in June 1999 and these days it is the site of some rather intense sulphur mining. At the peak, on a clear day, visitors are treated to amazing sunrises over the kilometre-wide bright turquoise lake. The more adventurous types can hike down into the crater for a closer look.

I’ve always been fascinated by volcanoes, there’s just something amazingly unreal about a mountain that spews out hot lava whenever it feels like it. They are one of Mother Earth’s most ferocious and unforgiving landmarks, so I was pretty excited about this trip to Kawah Ijen.

There are a few ways to visit Kawah Ijen. One is to make your own way to the nearby town of Ijen called Banyuwagi on public transport. From there, you can take a bus then arrange for an ojek to the start of the trail and find your own guide. Normally, this kind of option would be more preferable than joining an organised tour, but we found many tour groups operating out of Yogyakarta that worked out cheaper for us. Considering we were on a tight schedule, we decided to do one of those instead.

Read: Things to do in Indonesia 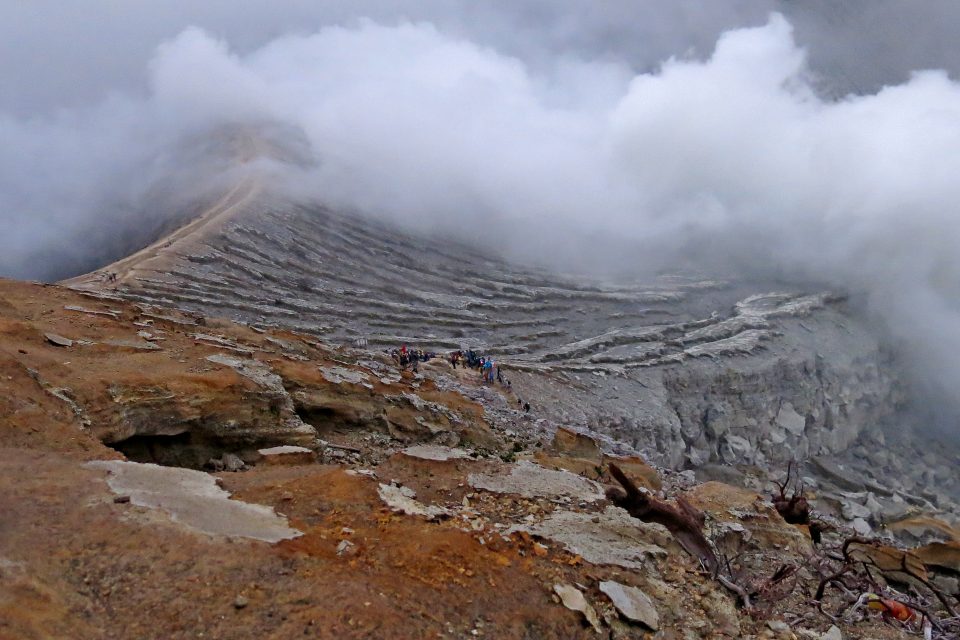 The best way to experience Kawah Ijen is to get up early (think 1am) and catch a ride to the start of the trail. From there it’s a two hour hike to the summit and you’ll want to be up there for sunrise. We arrived around 2.30am and were introduced to our guide, each taking groups of about 8-10 people. It was pitch black so I didn’t exactly get a good look at who we were following, but figured we’d be ok. Our guide handed us gas masks, to help keep out the sulphuric smoke fumes. At first I refused, as I’d bought a scarf and thought this was an add-on that we had to pay more for. When I realized that it was included in the price, I decided to take one. This was the best decision I made all day.

The hike up Kawah Ijen was fairly tough. At first, the path is quite clear, but the nearer you get to the summit it gets a little rocky, so boots and a head torch are definitely needed. At the top, we were given the choice to wait around in the cold for sunrise or to hike down into the crater. Inside would be the opportunity to see the local miners at work, and also witness the famous ‘blue fire’ phenomenon that occurs when ignited sulphuric gas escapes through cracks in the rocks. There are only two volcanos in the world that does that so we were pretty excited. By the time we started walking down, I had now lost my guide, and having no idea what he looked like I just followed a bunch of other hikers down.

The walk down was really intense, it seemed to go on forever. Knowing that the only way out is back up is a little off-putting, but we soldiered on in search of the blue flames. As we neared the lake at the base, we could see flashes of light from behind the smoke so we headed that way. The closer we got, the visibility got worse and I lost track of who was around me. Luckily, I had the gas mask on though as by now, the air was becoming increasingly difficult to breathe. 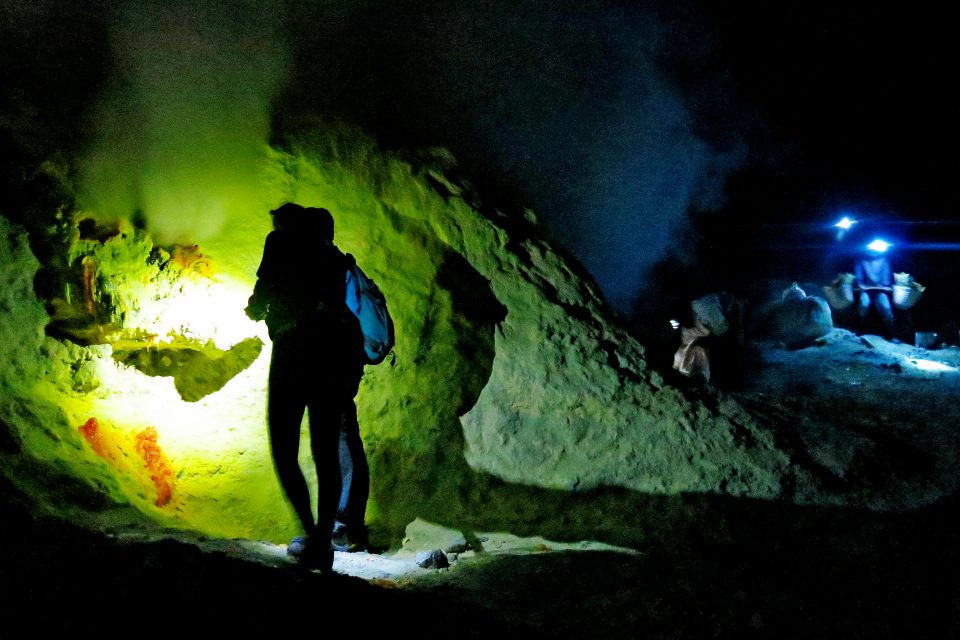 My Near Death Experience

I found a particularly cool looking patch of blue fire and stared at that for a while, but then suddenly the wind changed and I was enveloped in a huge, thick cloud of sulphuric smoke. While I’m sure the mask helped, I really struggled to breath, every breathe tasted of sulphur and made me cough intensely. I couldn’t see and I was coughing so much. I couldn’t even shout out for anyone. I quickly thought about what I should do, I had no idea if this was a normal amount of smoke, and although I knew it was unlikely, I briefly thought this could even be the start of an eruption!

I genuinely feared for my life. I felt stupid that I’d left my guide and didn’t know when my next clear breath would come. I headed sideways, to get away from the smoke, but it seemed to be getting worse. Then I heard a voice shouting ‘go down, go down’ and realised I wasn’t the only one in this predicament. I followed the voice and as the cloud dispersed, I took a huge, smoke-free breath. I felt very relieved. That was a very scary experience, but I was thankful I remained calm, thankful I had the mask and very thankful for that mystery voice guiding me to safety. 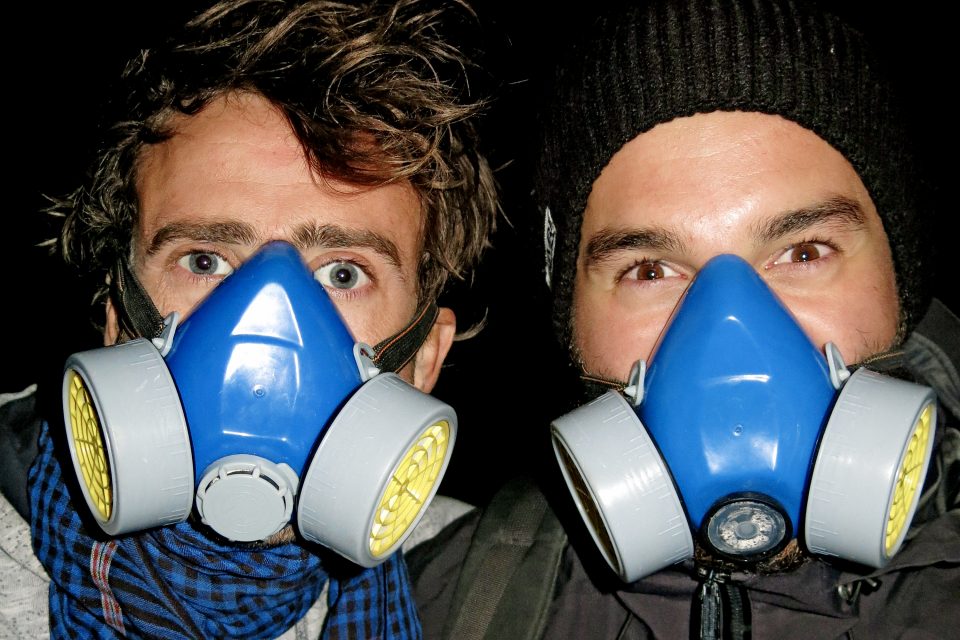 After all that excitement I began the arduous trek back to the top just in time for sunrise. Along the way, you will meet many sulphur miners carrying up to 80kilos of sulphur on their backs. They do this early in the mornings as when the sun comes out, it would be too hot to do so. They climb the volcano twice a day and sell the mined sulphur for a mere $5. It’s pretty insane!

Finally, I found my travel buddies and we wandered around to find a nice quiet view point. As the cloud cleared, the sun rose and shone over the lake, illuminating the brilliant turquoise waters. It was a beautiful moment. As it got lighter you could see how far the incredible view stretched out across Kawah Ijen and the surrounding mountains. We weren’t swamped by other tourists so we had the chance to grab some awesome photos. Before we began the short descent back down I was given some time to reflect on my rather exhilarating experience, knowing I’d maybe take a bit more care next time when dealing with sulphuric volcanoes. Needless to say, it was an adventure alright! 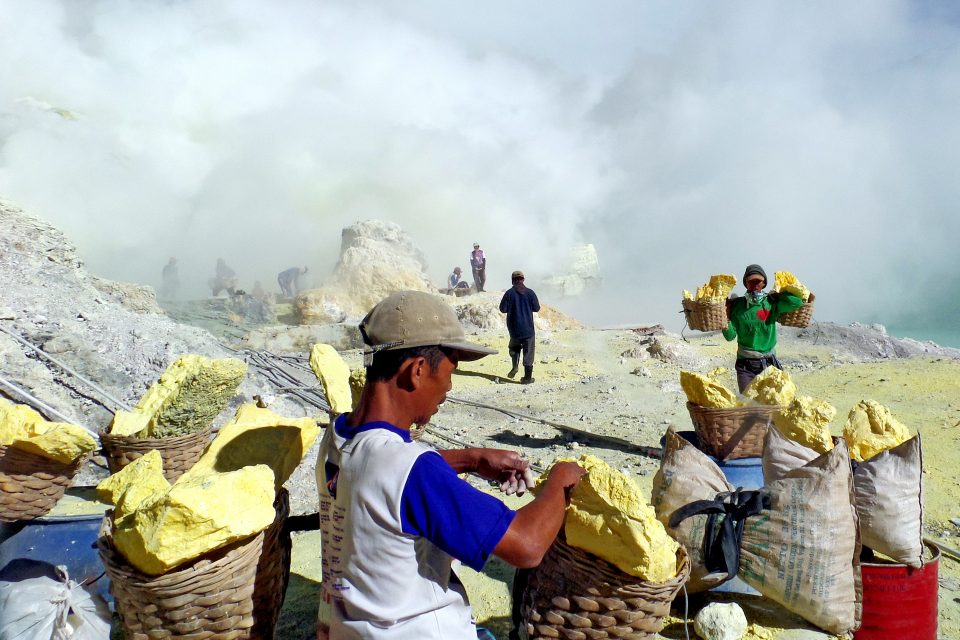 What to Bring for the Trek:

The Cost of Trekking Kawah Ijen (Prices as of 2015)

Please note that the drive up to the park is very windy and doing it on an ojek in the middle of the night can be a bit dangerous. 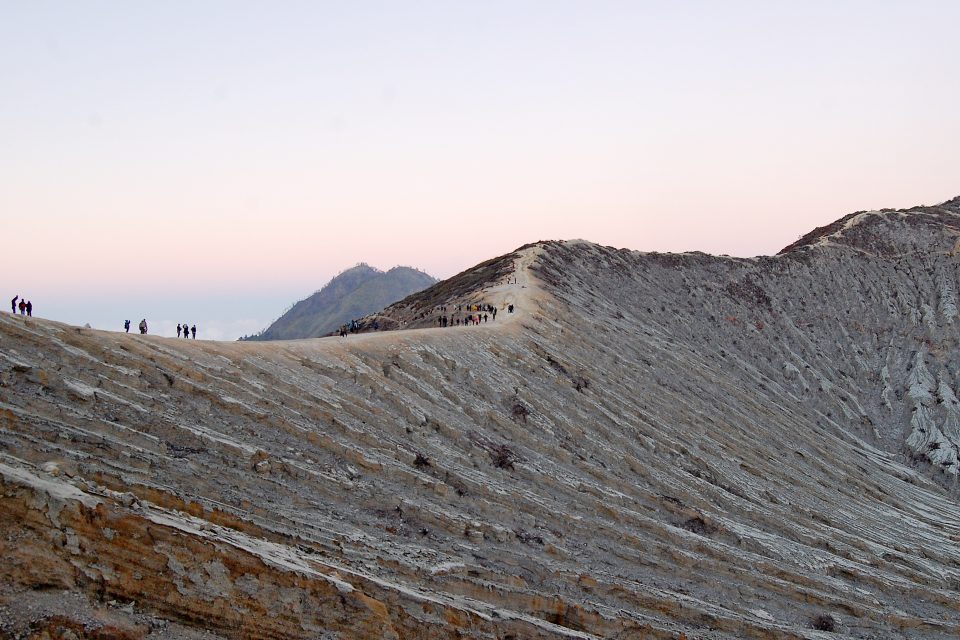 The tour we booked from Jogjakarta also included a trip to Mt Bromo the previous day plus all transport links and hotels. If you’re planning on heading there yourself, I would highly recommend finding a tour that does both as Mt. Bromo, although often very crowded, is definitely worth a look. (You can also do Mt. Bromo without a tour!)

Just make sure you ask around and find out the exact details of what is included and what isn’t, as some tour operators will sneakily omit some information. Park fees for example are not normally included, so find out what you’re expected to pay when you get there. Naturally, as hotel room costs are reduced, you’re likely to get better deals travelling in a group of two or more. 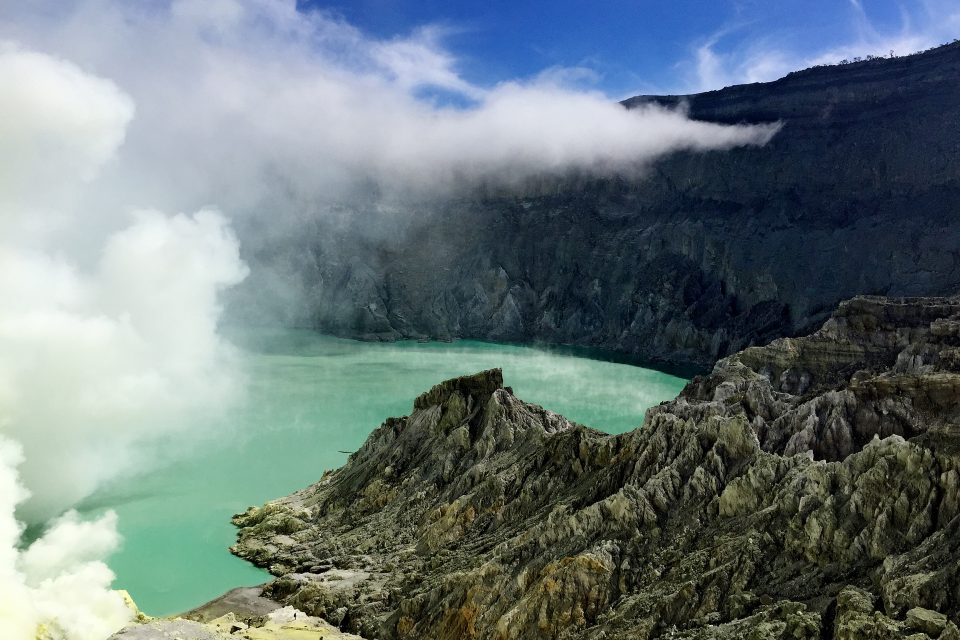 Check out these other adventures in Indonesia

From climbing volcanos in South America to getting lost in the Australian wilderness, Jon loves a bit of adventure! He is currently on a worldwide mission to find the 'best beer ever' and has an unhealthy obsession with Cornettos.