Berlin is a beast of a city and is home to a wide range of things to do. Museums, historical attractions, trendy galleries, parks, and of course underground clubs. Anyone that has been to this city will attest to its seemingly never-ending list of things to do. Given Berlin’s important historical role, there are a lot of dark yet fascinating historical attractions that are spread out all around the city. History buffs can get their fill as they explore this modern yet historically jampacked city. Here’s a compilation of the best attractions in Berlin that you can’t miss out on seeing.

If you’re traveling Germany or Europe for long, consider stopping to learn German in Berlin to help you make the most out of your experience. Nowadays, both travelers and even entrepreneurs are taking the time to learn German as it is the official language of five countries and is considered a majority secondary language in four others. In fact, it is one of the most widely spoken languages in Europe and is also the largest economy in Europe making it useful for business travelers and students.

To be perfectly honest, when I was traveling around Europe, I was half tempted to enroll myself in a language school in Berlin just so that I could stay in the city for longer. Between all the sights and attractions, surrounded by the old meets new city vibe, Berlin is a place that I could happily explore for a while.

Transportation wise, Berlin is a relatively large city making navigating around it quite a mission. However, as things are always so efficient in Germany, their public transport system is a breeze. Fare zone A is limited to sites within the S-Bahn ring and includes the city center as well while Fare Zone B & C cover the city outskirts.

This iconic architectural landmark often compared to as the Arch de Triomphe of Paris is an 18th-century neoclassical monument located in the heart of Berlin. Built as a symbol of peace and unity, this gate stands tall with its large columns topped with a four-horse chariot. The gate was designed similar to the Propylaea which was symbolic as the gateway to Acropolis in Athens. What was once a symbol of divided Germany soon became a symbol of unity when the Berlin wall was torn down. 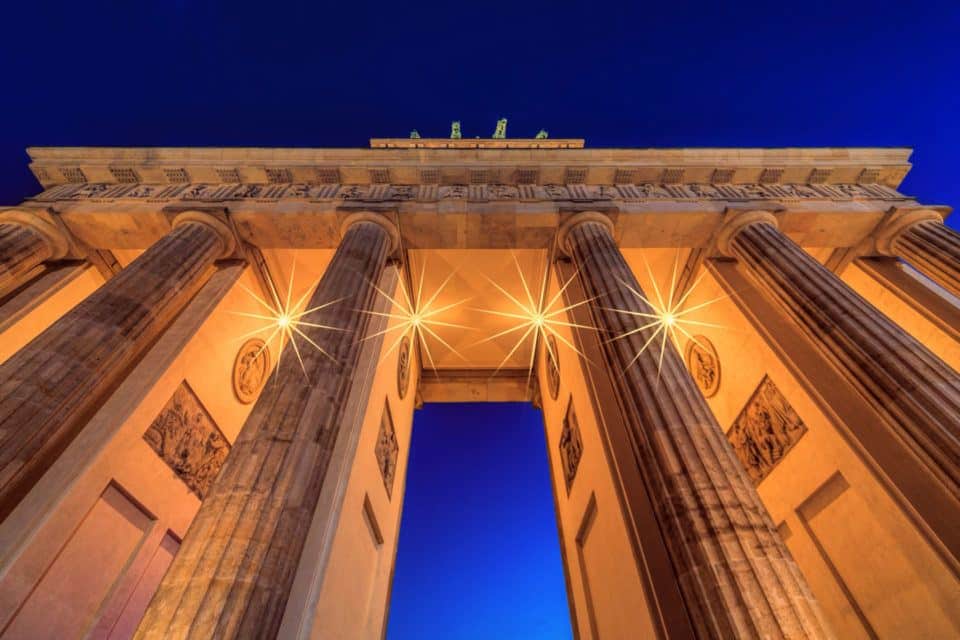 Although now Checkpoint Charlie is quite glamorized due to the many Hollywood film features, it is still a reminder of the former border crossing dividing Berlin during the Cold war. The barrier alongside with the checkpoint booth and the signs are all recreated to remember the crossing point between East and West Germany. Admittedly this Berlin attraction is quite touristy however the Checkpoint Charlier museum is worth visiting if you want to know more about the history of the Berlin Wall.

During my last visit, visiting the East Side Gallery was probably one of my favorite things to do in Berlin as it featured so many artists interpretation of what happened in the past. The East Side Gallery is the longest surviving section of the Berlin Wall and is now converted to the longest open-air gallery in the world. Spanning up to 1.3 km, this wall is covered by over 118 artists from all over the world depicting important moments in the past as they portrayed the political change that was happening at that time. If you love art and history, there are a few alternative East Side Gallery Tours, with expert guides walking you through this art-filled area as they explain the symbolic artwork on the wall. For more info, the Gedenkstätte Berliner Mauer (Berlin Wall Memorial) is also a must visit.

You know the saying if walls could speak? Well, this holds especially true for the Reichstag which has been bombed, burned, and rebuilt. Now, it’s tumultuous past is behind it as it is now home of the Parliament and is one of Berlin’s most iconic buildings with a glittery glass dome as well as a viewpoint which shows off 360-degree views of the city. If you are looking for more information, check out this article about visiting Reichstag.

Otherwise known as the Memorial to the Murdered Jews of Europe, this popular attraction which is located near the Brandenburg gate is this 19,000 square meter memorial site honoring the jews that were persecuted during the war. Created by building architect Peter Eisenman, he put over 2711 concrete slabs, all varying in height allowing you to see the memorial site from different angles. The space is open day and night, allowing you to freely wander around to come up with your own way of interpreting the horrifying acts that happened at that time. There is an underground information center filled with information, photos, and short biographies of the victims.

If you need a break from the popular city attractions, you can take a few hours off and wander off to Grunewald which was known as the largest forested area in the western part of the city when the Berlin Wall was still erect. Now, you can walk or bike along in peace as you explore this 3,000-hectare large forest located right in the city.

If you want to get a good look of the city, head on over to the TV Tower. Known as the highest viewpoint in the city, the Fernsehturm Berlin has an observation deck which is 203m above Berlin showing off incredible 360-degree views of the city. Alongside with the observation deck, there is also a bar where you can enjoy cocktails while gazing out at the city below you. If you want to take things to the next level (literally), you can also opt to dine in Sphere, a restaurant located 207m above.

There is something about sitting down and people watching in many of Europe’s famous squares. Watching people walk past and going about their daily lives is something I adore doing. In Berlin, one Gendarmenmarkt is one of the most iconic squares to do so. Surrounded by three architecturally gorgeous buildings (The Concert House and the German and French Cathedrals), this place is a popular tourist attraction in Berlin.

This UNESCO world heritage site has a variety of museums from the Altes Museum (Old Museum), the Neues Museum (New Museum) the Bode Museum, the Pergamon Museum and the Alte Nationalgalerie (Old National Gallery). If you’re a history and art buff, a trip to this cultural highlight is a must!

There you have it! Whether you’re in Berlin to learn the language, relish in its incredible culture, or take a walk along its historical lined streets, hopefully, you find the time to explore some of its incredible attractions. If you’re looking for more information on traveling the country, check out our Germany Travel Guide for more details.

Looking for more articles on Germany? Check out a few of our best ones