From snow capped mountains, stunning lakes, and lush forests, Asia has no shortage of fantastic trekking trails to explore. The beauty of exploring a region by foot is being able to see the untouched natural landscape, remote villages, and local culture which you encounter along the way. So if you’re in need of some inspiration for your next big trip, check out some of these epic trails around Asia.

Naturally, climbing Mt. Everest is a wet dream that plagues every avid mountain climber out there. However, a less dangerous and more attainable feat would be climbing the Everest Base Camp which you can reach from either Nepal or Tibet. On the way up to Base Camp, not only will you test your physical and mental will power, you will also be able to enjoy stunning views and experience the local Sherpa culture. The South Base Camp accessible from Nepal and is 5,364 meters high. Alternatively, the North Base Camp from Tibet is 5,150 meters high but is equally as challenging.

Who: Hardcore climbers who can tolerate extremely cold climate and high altitudes

Duration: Roughly about 20 days (best not to rush it due to the high altitudes)

When: The best times to reach Base Camp would be from March to May and from September to December. December gets very VERY COLD (below-zero temperatures) so keep that in mind. 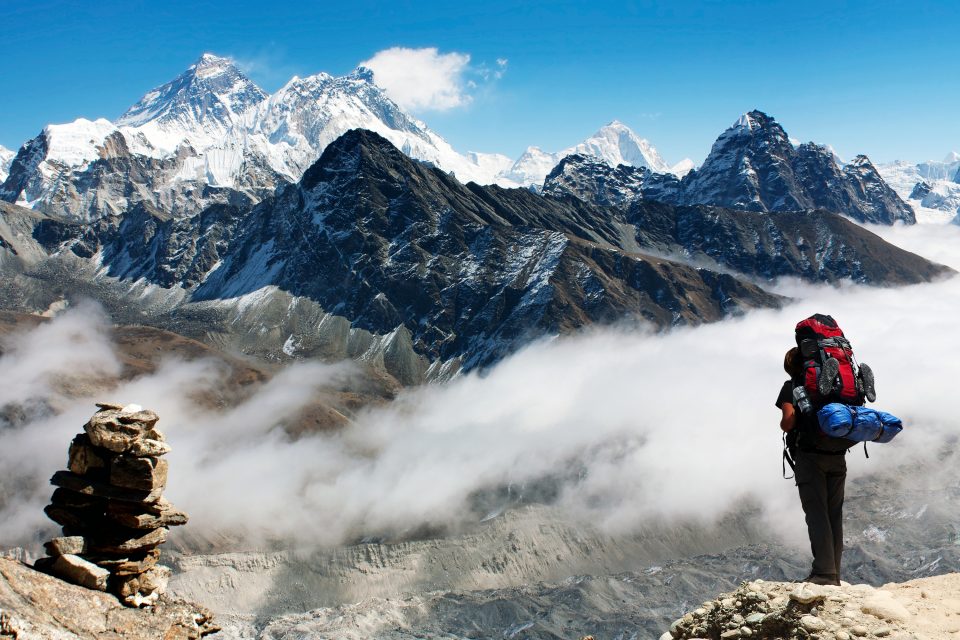 Mount Kinabalu in Borneo is a popular choice amongst travelers due to its accessibility. Compared to the other high peaks, reaching the summit is easier and takes only two days. Recently, you can also climb this Via Ferrata which is ironically the highest in the world (via ferrata translates to “iron road” is a series of steel cables and ladders leading you to the summit) The sunrise from the top makes this experience worth it as you stand above the sea of clouds. The highest point of Mount Kinabalu stands at 4,095 meters and is a great challenge for those who want to reach a summit quickly.

Who: Travelers who want a relatively “easy” summit to climb (easy in a sense that it only takes a couple of days) where a general level of fitness is needed.

When:  Although you can climb Kinabalu anytime of the year, it is still advisable to climb this summit during the dry season which falls from March to August.

Climbing up Indonesia’s second largest volcano, climbing Mount Rinjani is a test of both your physical and mental fitness. Peaking at 3,726 meters, this active volcano is one of the most popular treks in Indonesia where you can climb the crater rim then down to the stunning crater lake. As this is an active volcano, the last erruptions from 1994-1996 have formed a small cone called Gunung Baru Jari.

Who: climbers who are physically fit and are adventurous enough to climb at active volcano

When: From January to March, Mt. Rinjani National park is usually closed due to heavy rain. The ideal time to climb is from May to November during the dry season.

For those who are serious about their trekking, dubbed as one of the hardest long walks in the planet, The Snowman Trek is even higher than some of the highest points in the United States. Although you are only covering about 200 miles, this trek normally takes up to 25 days due to the high altitude and unpredictable weather caused by the elevation levels. As tourism is very much controlled in Bhutan, your chances of encountering other climbers are very slim. Seeing stunning scenery and various wildlife animals like snow leopards add to the appeal of this arduous trek.

Who: Hardcore climbers. Like, really hardcore. Also, climbers who have a lot of money to burn as climbing this trail can get quite pricey (around $8500) as the Bhutan government has imposed a minimum tariff on foreign visitors.

When: Due to the high altitude, the window to go on this trail is quite narrow with October and sometimes April being the only months that are ideal to avoid rain and snow.

For those that enjoy hiking Mountains but don’t necessarily want to be doing it for two weeks (i.e. pussies like me!), a relatively easy but equally stunning climb is Mount Bromo in Indonesia. This active volcano is surrounded by a plain which is known as the Sea of Sand. Although the climb is not difficult at all, scrambling to the crater rim while you have steams of sulphur clouds emerging from the crater is quite exciting. Ascending this in time for sunrise is a popular activity as you see a sea of clouds illuminate as the sun rises.

Who: Travelers who are looking for a fun activity to do. The climb is easy but the views along the way are pretty stellar.

When: Anytime of the year depending on the weather

More often referred to as “the roof of the world”, The Pamir mountain range is home to some of the highest mountains in the world. It’s uninhabited snowy peaks offer climbers exhilarating treks, a glimpse at a untouched culture shielded from a lot of modern day media, topped with some of the most epic views ever, making this a pretty unforgettable experience. Since the collapse of the Soviet Union, Western mountain climbers have been permitted to climb this rugged mountain range.

Who: Hardcore climbers who are up for expedition like treks along undiscovered mountain tops and ranges.

Duration: Depending on where you want to go, what peak you want to summit and which area you want to approach it from, the duration of your trek would greatly vary.

When: Due to the multiple elevation levels, the best time to go for wilderness trekking in the Pamirs. Deep snow blocking certain passes and a few other erratic weather conditions have to be taken into account when attempting to climb this mountain range.

Along with Mt. Everest, the Annapurna Circuit in Nepal often graces the top ten list of most epic hikes due to well, it’s epicness! From weaving mountainous peaks, winding rivers and stunning mountain ranges, the entire circuit takes about 17-21 days to complete. It takes you through holy Hindu and Tibetan sites, reaching a high point of 5416 meters. Although this trek isn’t too difficult, the cold weather and high altitude are still factors to consider.

Who: Adventurous people who are willing to rough it out and trek for a long period of time

Duration: 17-21 days, depending on what route you take. There are also mini 5 day treks that you can do.

When:  Similar to Mt. Everest, the best time to trek the Annapurna circuit is from March to April and September to November. June to September is rainy season so try to avoid those months if you can.

This popular hiking trail consisting of a 16km gorge is one of the world’s deepest river canyons. It got its name after a legendary tiger leaped across the gorge while hunting. There are two main walkways, down the valley or up above by traversing mountain pathways. The scenery is stunning as you have the dramatic Yangzi River roaring in the background. The Tiger Leaping Gorge itself isn’t strenuous and is very much enjoyable. There are guesthouses along the way which are very basic but will do the job.

Who: Climbers who want to see beautiful views without exerting too much effort.

Duration: Some finish the trek in a 1.5, some do it in 2. Our suggestion is not to rush it. Take at least 3 days in order to fully explore all the trails and make the most of the sights along the way.

When: The best time to go is during April to May, or September to October, when the weather is typically dry. If you can, avoid the rainy months of July and August as landslides and heavy rain are quite common.

The highest and largest part of India is located by the Ladakh Range where you will see a large Tibetan influence. Home to lots of sheeps and yaks, this mountainous area is a beautiful place to trek as you enjoy the beauty of things around you. Hilly terrains, rocky cliffs, and stunning grasslands, the ranges vary from 2750 to 7672 metes above sea level. Check out Ladakh Tourism for great adventure packages!

Who: Adventurous climbers who want a variety of things to do (in the area there is mountain biking, whitewater rafting, and various remote villages)

Duration: Depending on which trail you want to take, there are treks that go on for 5 days all the way to 21 days.

When: June to September is the most recommended time to go to Ladakh

Home to some of the most preserved rainforests in the world, Mount Tahan (Ganung Tahan) is a big playground for nature lovers. With the highest peak going at 2187 meters, this trail ranks as one of the best forest treks out there. Crossing through various rivers, steep ridges, and untouched jungles, sighting of wild animals such as black panthers, tigers, and Sumatran rhinos make this trek quite memorable.

Who: Adventurous people who are physically and mentally fit.

Duration: 3-7 days, depending on which route you choose. Best done with the help of a local guide who is familiar with the forest.

When: The best time to climb is the dry months between March and September.

Want to read more about trekking? Check out our other articles