After spending a month soaking in the sunshine and surf in Olon, we decided it was time to move further down the coast. Our next stop, the popular town of Puerto Lopez. Although there wasn’t much going on in the town itself, during peak season, it gets very busy as tourists flock towards this destination to partake in the many tours that Puerto Lopez has to offer including whale watching.

The highlight of Puerto Lopez? Visiting the well-known Machalilla National Park. The park itself was established in 1979, spanning out through beaches, forests, small islands and two larger islands namely, Salango and Isla de la Plata.

Read: Things to do in Montanita that are Better in Olon

After doing our research, we decided to partner up with Machalilla Tours, mainly for the great reviews that their company has. As soon as we got to Puerto Lopez, we knew we made the right decision as there were literally LOADS of small tour companies which was rather overwhelming. Soon after arriving, we went to their office and booked two day trips with them, one to the popular, Isla de la Plata which is otherwise known as the poor man’s Galapagos. Being that visiting the Galapagos Islands was completely out of our budget, we decided to go to Isla de la Plata instead. The other tour was to Sucre Islet where we were to enjoy a day of kayaking and snorkeling. 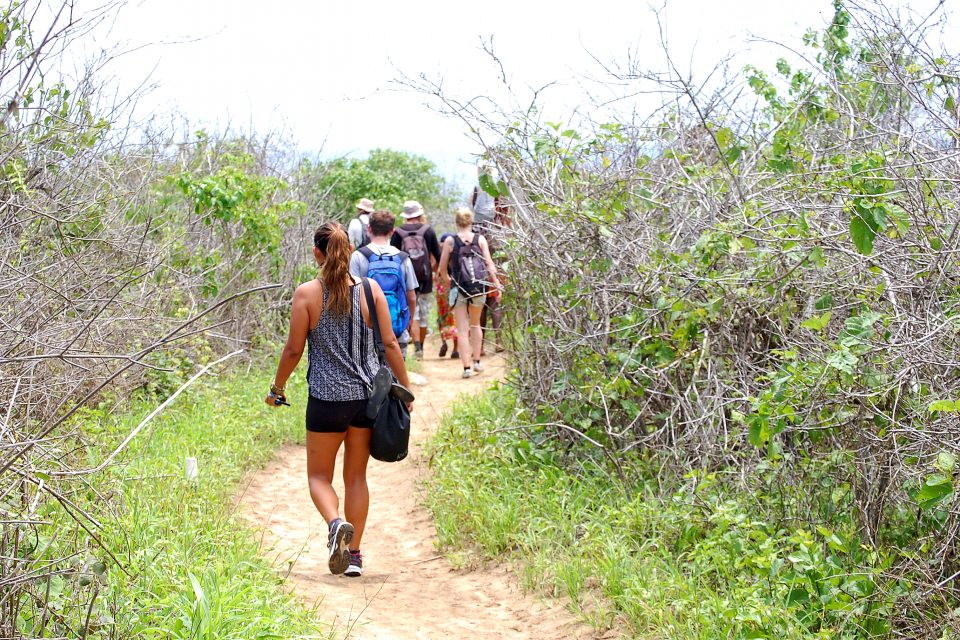 At around 9 in the morning, we turned up at the office of Machalilla Tours and were quickly ushered towards the port. Upon arrival, you’re expected to pay a $1 tourist fee for the use of the port. The sun was out, the skies were blue, and we were more than excited to get on a boat! Isla de la Plata was around 41km away from Puerto Lopez, which meant we were going to be on a boat for about an hour and a half. Along with other people in our tour group, we had two guides with us. One who spoke Spanish and has been working around the National Park for over 13 years, and one English speaking guide who was as knowledgeable and interesting. We got a brief overview of the island, the animals we can see around the area, and a few other standard reminders.

Somewhere along the way, our boat stopped in the middle of the ocean however, after a few minutes of fiddling from the well experienced boat men, we were back on track. The crew were all unbelievable nice, regardless of our little Spanish. The boat ride to the island was beautiful. We could only imagine how amazing it would have been if we were there in time to catch the humpback whales which pass through the seas off of Puerto Lopez every year. 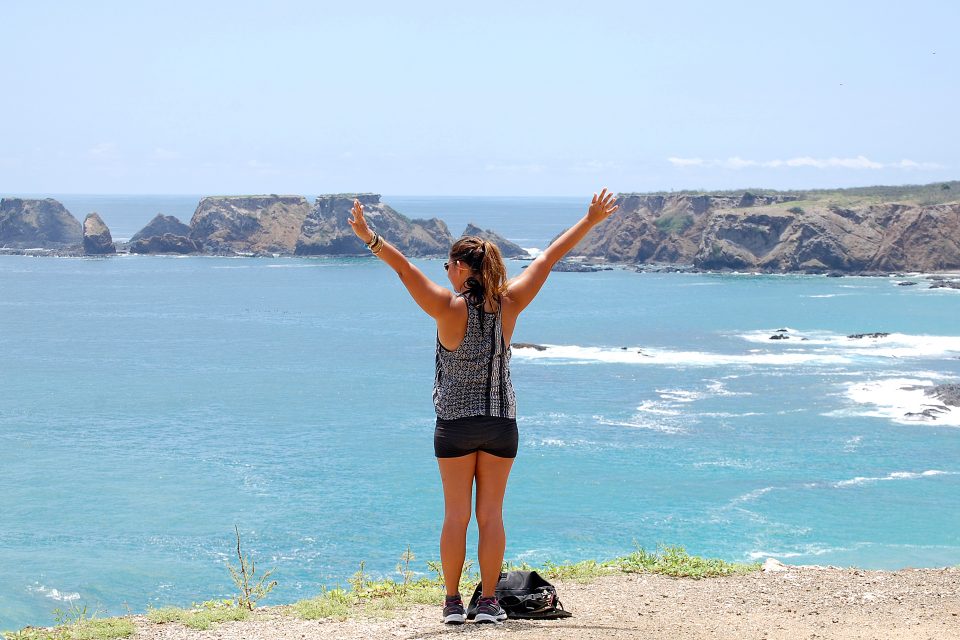 Soon after we arrived, our boat docked to a rather unassuming visitor’s center where we got to use the bathroom. Around the area were small wooden placards which had interesting facts about the animals that you can see around the area. Armed with bottles of water, a sun hat, and heaps of sunblock, we began our trek inland. The weather was extremely hot but to us, it didn’t matter. We were surrounded by lush greenery and interesting creatures. Really, what more could we ask for? Along the way, our guide would stop to explain a few things about the island and the species of animals that we would come across.

After a few meters of trekking, we reached the start of what would turn out to be a lot of stairs. Despite the heat, we trooped on, enjoying the beauty of the outdoors. We soon reached a shed which was where we would decide on which trail we would take. Our guide Wilmer told us about how the island was named Silver Island due to the treasure that was supposedly brought by Sir Francis Drake in 1579. Apart from that, it is also called Silver island due to the many birds that inhabit Isla de la Plata. Apparently, their poop illuminates and reflects in the moonlight, helping sailors navigate the waters in the olden days. Quite ironic and interesting at the same time! Since we were with a group that had young children, we opted to do the short trail which went all along the coast. 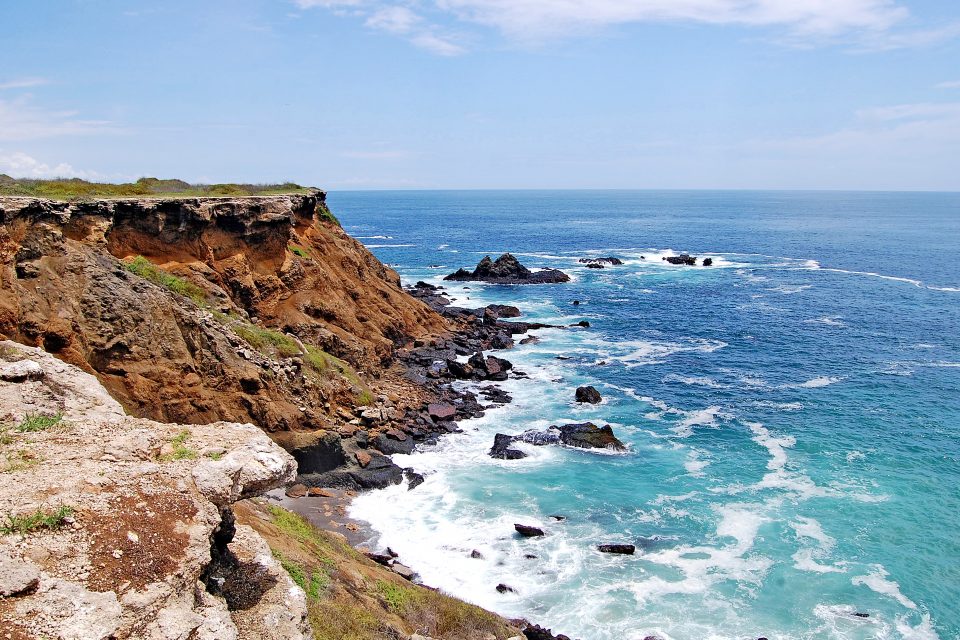 To be perfectly honest, the views alone made the entire trip well worth it! The entire coast line was one stunning photo after the another. We couldn’t help but take a few moments to take it all in. Along the cliff of the coast, we could see so many birds flying or perched along. The popular blue footed boobies, along with red footed Nazca boobies, and many other species.

After a relaxed hike back, we got back to the boat and were immediately served some fresh fruit! The watermelon and pineapple slices were a great way to cool down after our hike through the island. Lunch was served on the boat and was made up of tuna and cheese sandwiches. We then went to the other side of the island which was supposedly great for snorkeling. 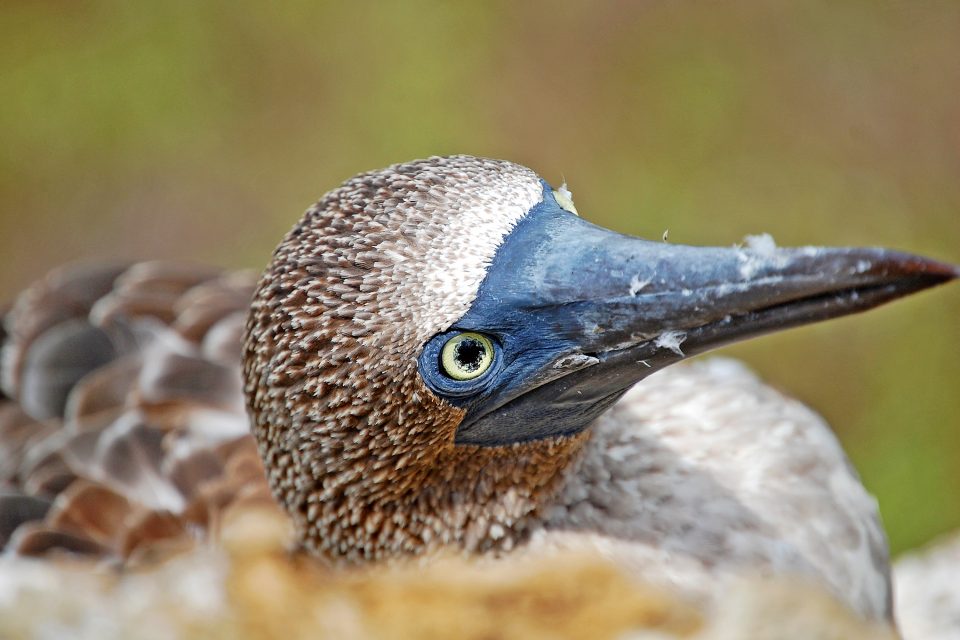 As soon as we got to the other side of the island, we jumped in the water, excited to see what was underwater. We weren’t too fussed with the snorkeling but I suppose a lot of it has to do with the fact that Tom and I have been spoiled by the many amazing reefs around South East Asia. Maybe a lot of it has to do with the season but the visibility wasn’t too great when we went. We did see quite a few turtles swimming around one area (where we stopped to have lunch) which was quite fun. On our way back, we joined the captain at the top of the boat. Driving back to Puerto Lopez on top of that boat was nothing short of stunning! Ultimately a great way to end the day. 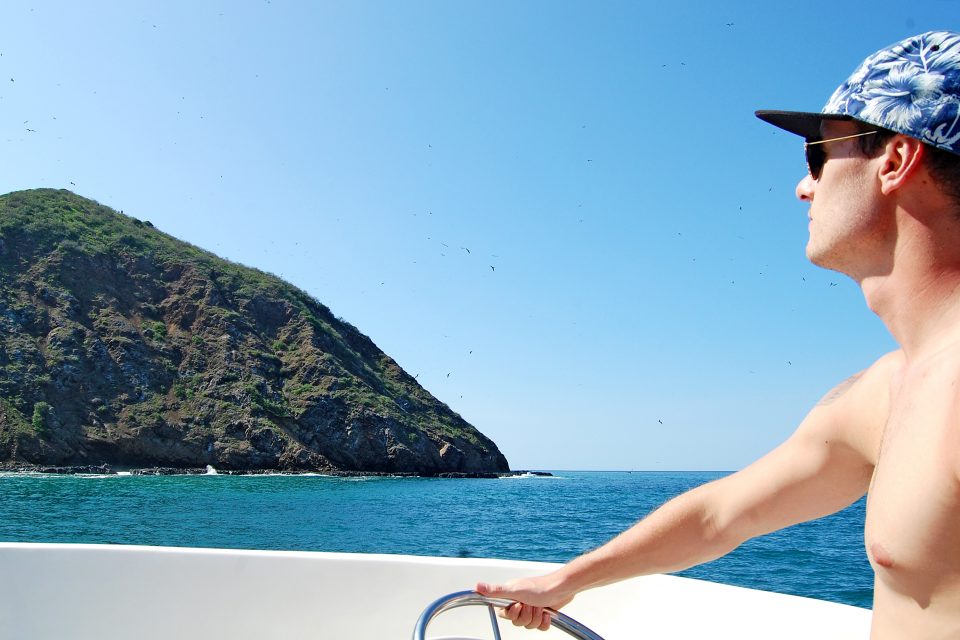 The next day, we signed up for another tour with Machalilla Tours, this time for a day of snorkeling, kayaking and some discovery scuba diving. Again, the tour started in a timely manner. We were a larger group this time and headed towards Sucre Islet. Our English speaking guide wasn’t with us on the second day so some instructions got lost in translation, despite the month long Spanish lessons that we have been doing. Luckily, the dive master that was with us on the boat spoke fantastic English and was more than happy to translate for us.

Although we enjoyed our day, the tour itself didn’t stand out for us due to the snorkeling. Again, like I said earlier, it might be the season but the reefs which we saw were just a little bit lacklustre. Naturally, we didn’t let it ruin our day as after all, we were still in the middle of the ocean, enjoying yet another beautiful day. We soon got the kayaks and started kayaking around the small island. The island itself is rather striking, dotted with different species of birds perched in the middle of the sea. The group that we were with had a blast snorkeling and doing some discovery dives. 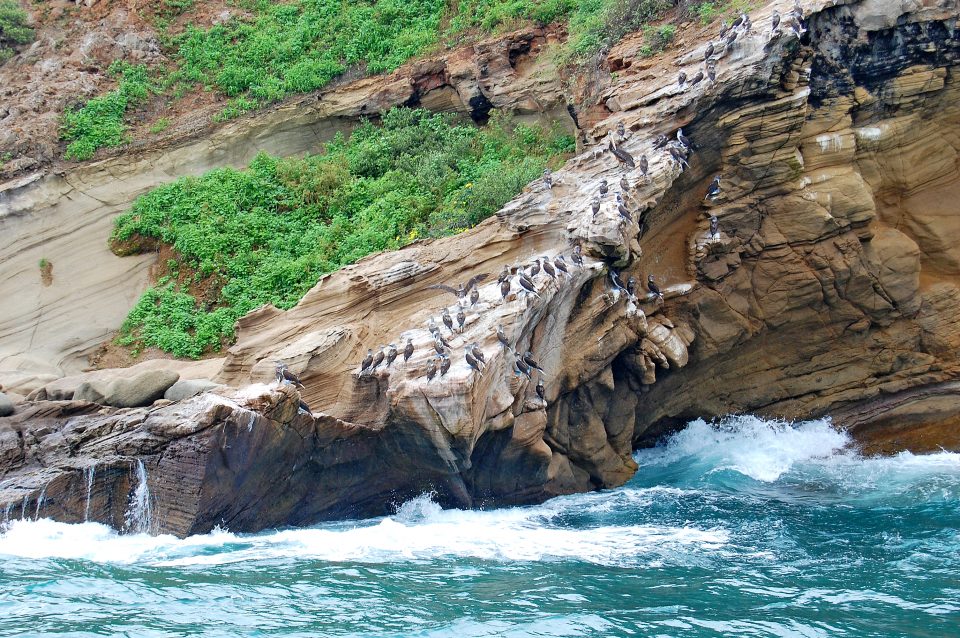 One of the highlights of this day trip was seeing the famous Los Frailes Beach, a place which is known as one of the most beautiful beaches in Ecuador. As soon as we arrived, I jumped in the water as it looked too inviting. Little did I know that there were huge waves breaking near the shore, acting like a giant wave pool. The beach itself is shaped like a cove with the waves breaking right in the middle. The areas in the sides are a lot more peaceful and tranquil. Naturally, Tom and I jumped in the water and had a blast! Together with a few people, we were playing in the waves like little kids. The beach itself was stunning and is definitely worth visiting!

Insider Tip: Go to Los Frailes Beach on a weekday rather than a weekend. You will most likely find the beach all to yourself!

What to Bring for the Isla de la Plata and Sucre Islet Tour:

Apart from those things, Machalilla Tours provides everything from lunch, refreshments, down to the snorkels and masks.

The tours that we availed of was $35 each day (during low season) and was well worth it in our opinion-especially Isla de la Plata. Other tour operators offer it for as low as $30 but to be perfectly honest, I would pay the extra $5 as we received excellent service and our guides were extremely knowledgeable in explaining the different species of birds etc. We thoroughly enjoyed the trip to Isla de la Plata whose views alone would make a trip out there worth it. For an updated pricelist, check out the website of Machalilla Tours.

Overall, we had an awesome time during out two day trip exploring Machallilla National Park and the islands around it. If the Galapagos Islands are out of your budget, a trip to Isla de la Plata is definitely a must.

Please note that despite receiving complimentary services from Machalilla Tours, all opinions are ours and remain completely unbiased.

Traveling around Ecuador? Check out our other articles for inspiration