The Worlds deadliest trail… even the title has a hair raising fervor about it. It’s been on our bucket list for years and we always knew that someday we would dare to do it. However, as we were departing Xian railway station for the Mount Huashan scenic area, the doing part now seemed a little tougher mentally than a once, off the wall bucket list item.

And if the adventure itself didn’t get us hyped enough, we had two days to climb to the “Plank Road In The Sky” located at the South Peak of the mountain. Despite many travelers coming to Xian for the most famed attraction, The Terracotta Warriors, it is a shame that Mount Huashan goes somewhat down the pecking order as it is widely cited as ‘The Number One Precipitous Mountain under Heaven’. It is easy to see why, considering it offers an illustrious North, East, South, West, Central peak climb, stunning scenery and a picturesque landscape just 130 km from the city.

The climb to the South Peak deserves an adventure review in itself. We started our ascent in glorious sunshine, drinking in the natural vista. The mountains consume you the further you climb and it becomes very apparent that with the steep and narrow paths, rugged cliff faces and high mountain range, this is indeed the perfect setting for the Worlds deadliest trail.

Read: What the Hell Does Adventure Mean? 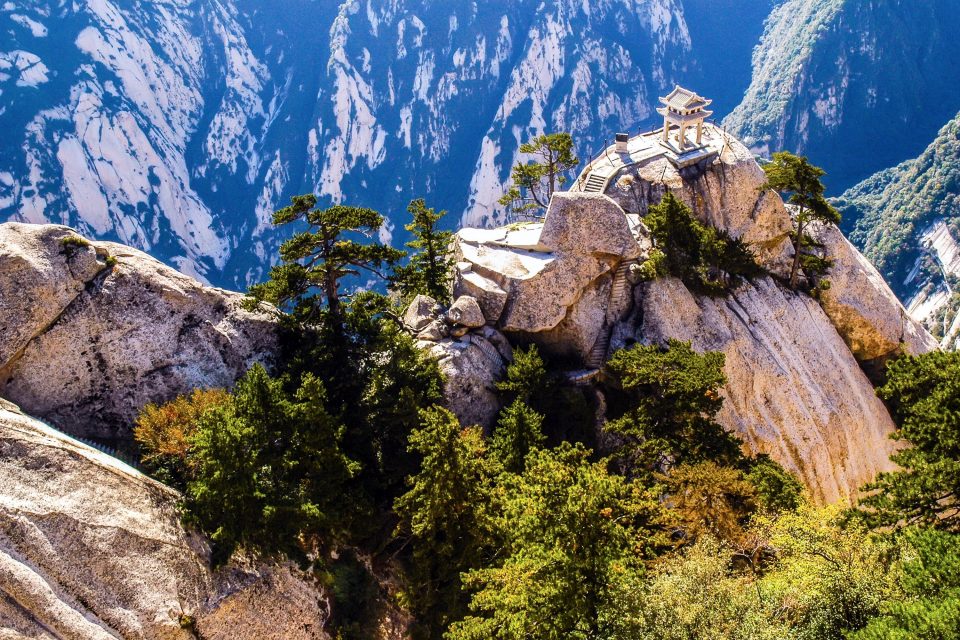 We eventually climbed to the East Peak and arrived at approximately 11 pm where we bedded down on the East Peak Observation Deck for the night. We rented Chinese soviet jackets for the night (50 RMB/$8) in preparation for our walk to the South peak in the early hours of the morning after watching the sunrise as we trudged along with a large Chinese clan of sunrise worshipers. We slept in anticipation of the mornings trail. Ironically, it was as if the world knew of our morning perils as it lit the night sky with a lightening storm which crashed down on the huge rock faces below us. The script couldn’t have been written any better. This was some prep night before the main event! We watched in awe with the essentials that we’d packed, several cans of Budweiser and a snickers bar. We came prepared!

Realted: To Plan or Not to Plan when Traveling?

On a serious level though, here’s what you might need to bring for Mount Huashan:

Climbing the Peak of Mount Huashan

The South Peak and “Plank Road In The Sky” is about a 40 minute walk from the East Peak and we wanted to be one of the first people on the day to take on the deadly trail. Setting off even this early we were met with a queue to get onto the actual trail, as if our day and night climb wasn’t teasing us enough! The adrenaline was well and truly pumping by now. We’d had more than enough time to let the size and apprehension of this challenge brew. Get us onto the trail already! As we neared the harness crew, the queue fell quieter and quieter and increasingly shorter as some of those in front of us had second thoughts about what they were actually about to do. We were approaching the start of the trail and could now see the tiny dots against the backdrop of the mountain landscape, awkwardly creeping down the metal poles, which act as steps to the plank road.

Read: 10 Epic Treks in Southeast Asia That You Have to Experience in Your Lifetime 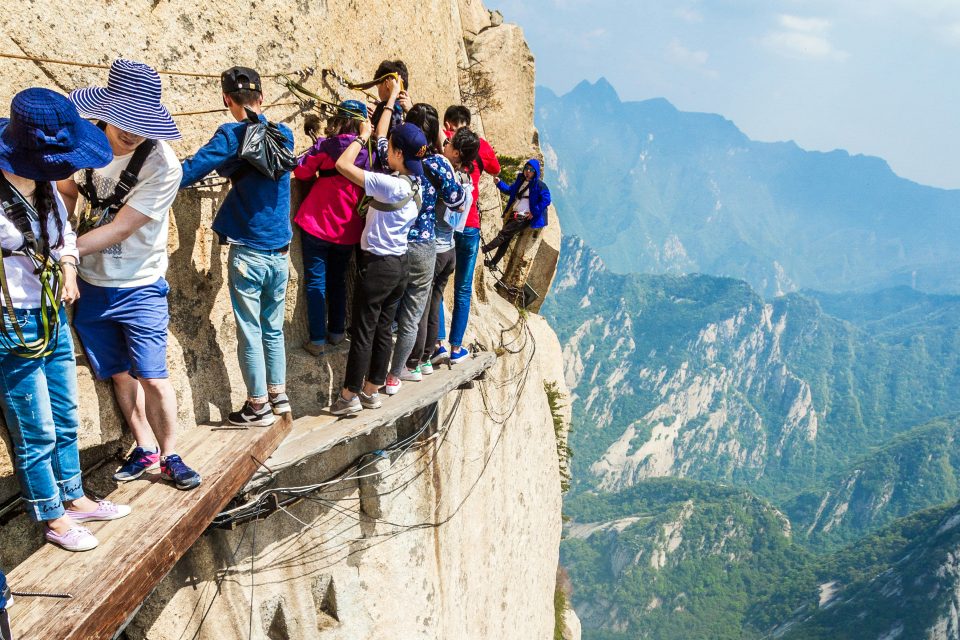 Putting our bags aside and paying for our 30RMB/ $5 harness, we attached our first carabineer to the ‘safety’ rail. As if this is safe we told ourselves, it doesn’t hold the worlds deadliest trail title for nothing. Although unconfirmed, it is rumored that there are 100 casualties a year from taking on this route, though it does seem that every precaution has been taken to minimize the impact of a certain fatal fall. Your destiny is in your own hands along the trail. Technically you can unhook both carabineers at the same time meaning you are literally standing on nothing but a 0.3 m plank of wood 5,000 ft above the abyss below. We are used to adrenaline junkie activity and we have taken on various “Worlds highest” before, world’s highest bungy jump, worlds highest skydive without the use of oxygen, but this is a whole new level and the feels are too!

There is no time to catch breath as you navigate your way across the planks of wood wedged into the mountain side and clambering foot by foot over iron rods protruding from the rock. Small cut outs barely large enough for 1 foot greet you toward the end of the trail and as you look down to nimbly place your feet one by one in the divots, there is no shielding your eyes from the pit of razor sharp rock faces below. This is some serious deal! Want to see more heart racing photos? Check out these other photos of Mount Huashan we found here! 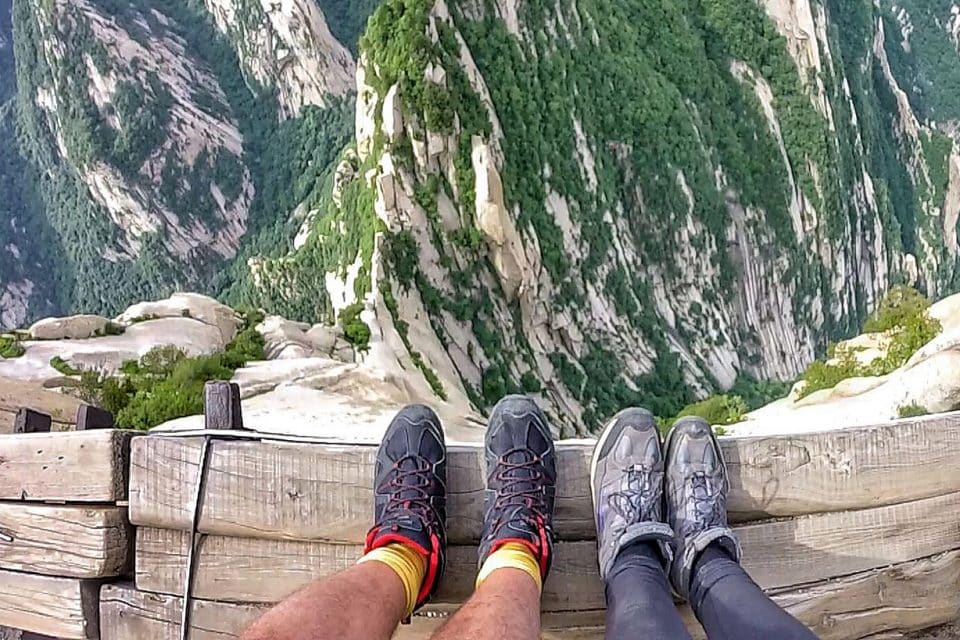 There is so much going on in your head, 1 hand here, 1 foot there, is the harness secured properly? What section of the trail is coming next? Am I in cardiac arrest? All of this going on as your eyes wander uncontrollably to the canvas that is painted all around you.

Heart in mouth is an understated expression for this trail. In your head every moment could be your last and this fills you with life, energy and adrenaline pumping through your veins. This is what it feels like to be alive! Before the trail consumes you, you step off onto firmer ground to catch your senses… until the realization hits you that the only way back is to turn around and go in completely the same direction as you’ve just so shakily come from! Round two, only this time, you have people coming at you along the cliff side of the trail, which you have to unclip your harness and clamber around mountainside! OH, HELL NO! 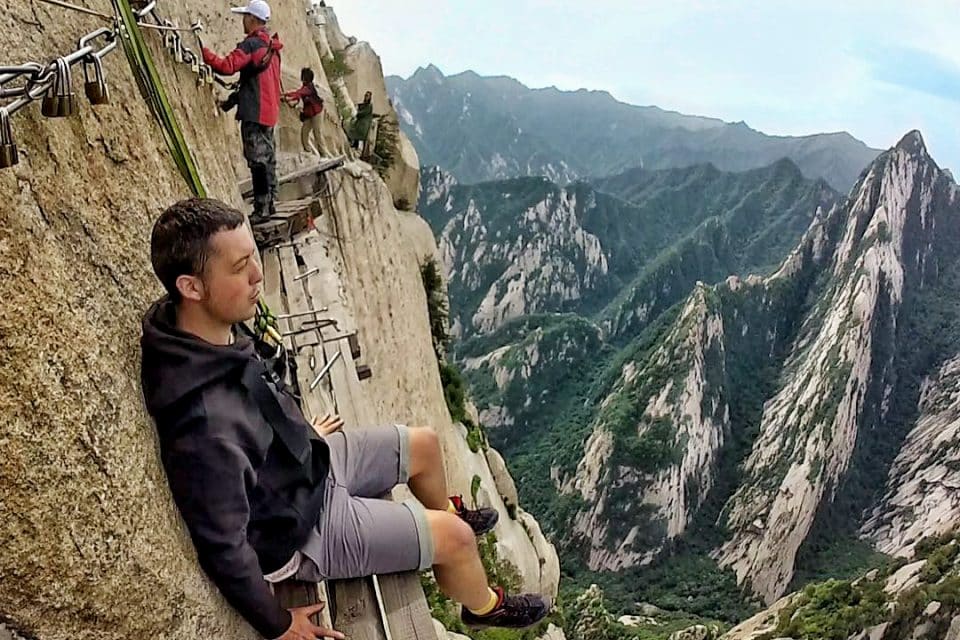 It is definitely not for the faint hearted and not for everybody, but we would hands down recommend this to anyone with a sense of adventure and a curiosity to take on something that completely defies natural instinct. Above all else, this is fun. It is an amazing feat to have conquered and is an experience you will treasure forever. “If you’re not living life on the edge, you’re taking up too much space” No quote has been so fitting. 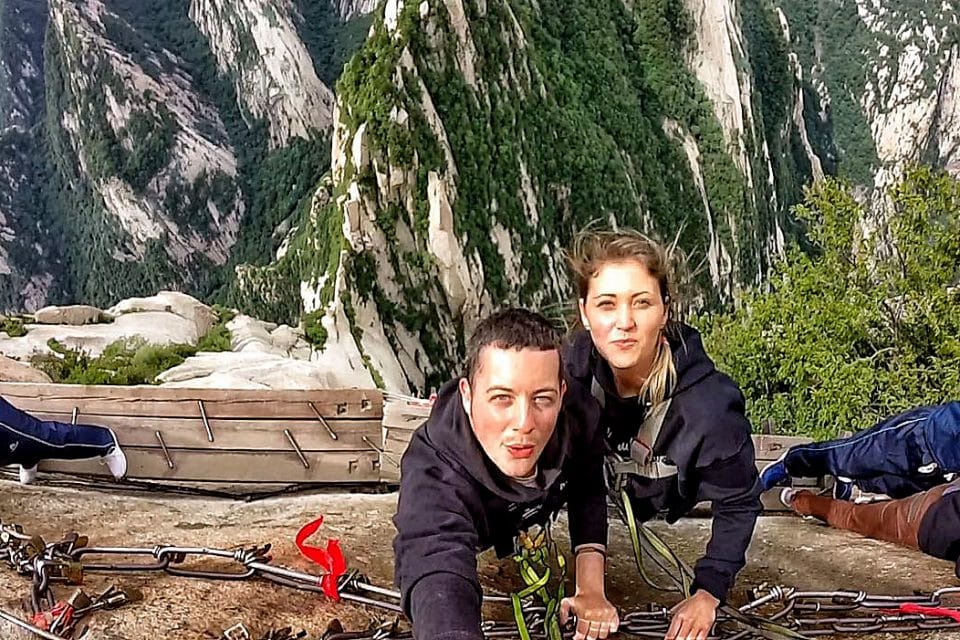 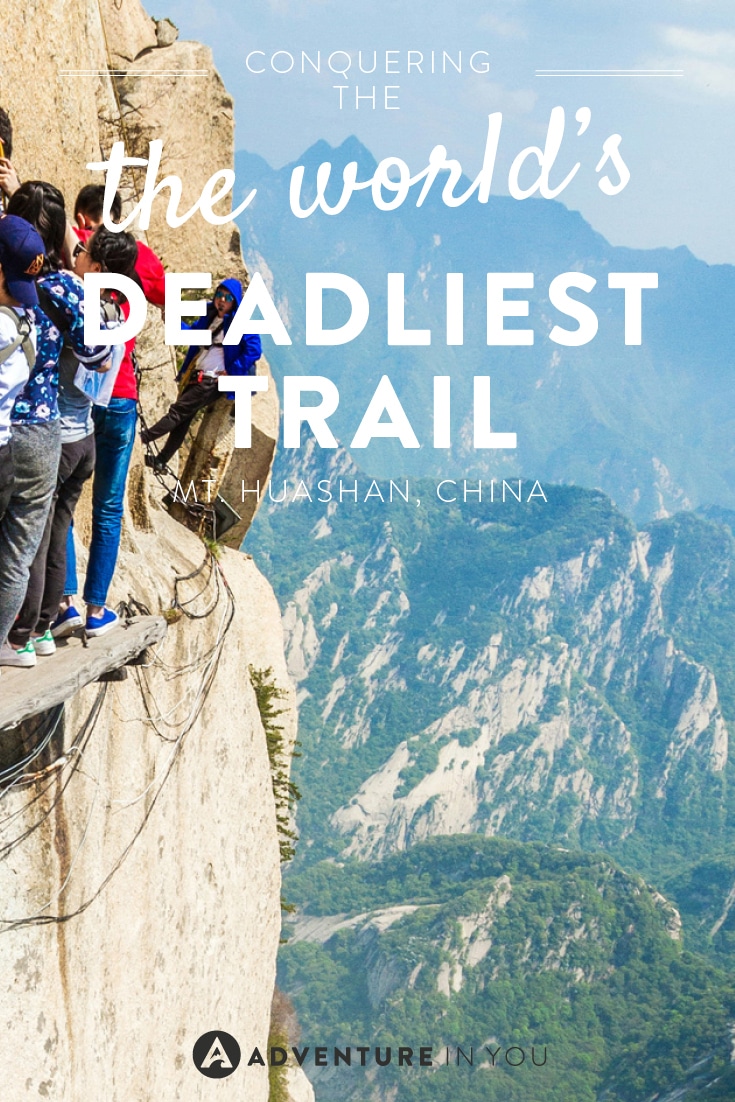