No sooner had we flown into Hong Kong, we were flying off the famous Macau Tower. Less than 24 hours after we had arrived, we were taking on the highest bungee jump in the world. Not a bad introduction to the start of our 6 month tour of China!

We have had this on our bucket list for months. We’d seen the pictures, we’d watched the YouTube videos with envy. Now suddenly, our ferry from Hong Kong was docking into the port of Macau and the tower, standing 764ft tall was in our sights. No pictures or videos can do the anticipation of launching yourself off that very building justice! I was buzzing with excitement, Charlotte feeling sick to her stomach, she blamed the turbulent boat ride, but she was not fooling anyone! The idea of the world’s highest bungee jump was now very real!

Macau is known as the Vegas of Asia. The skyline is lined with casino after casino and is a playground for China’s rich and famous. We couldn’t help but feel that we were taking a gamble of our own. Arriving at the very plush Macau Tower, saturated with tourists, we joked which ones may be doing the same thing as us, however as we arrived at the 61st floor in the glass elevator, we realized that what we were about to do was no laughing matter! Let the heavy breathing commence!

RELATED: What the Hell Does Adventure Really Mean? 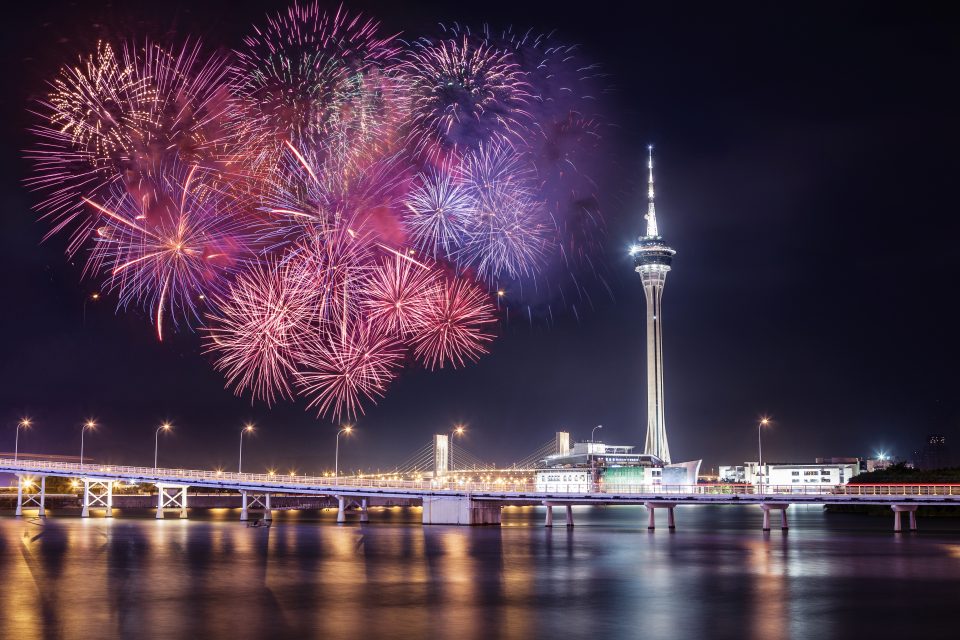 Our Bungee Jumping Experience in Macau

We were welcomed from the lift by a smiley guard singing, “big girls don’t cry”, it was obvious he wasn’t destined for the same fate as us! For the next 15 minutes we were told the basics of our jump, the position we must assume, how to release your feet after the jump and more than anything to just “take it all in” from the top and “enjoy”! It was easy for them to say!

The team at the top were great! Each one has done several hundred jumps and entertained those nervously waiting in line as each “boarding pass” holder was called one by one to await their fate! We were fitted into our harnesses, weighed, and given a jumpers edition T-shirt. We waited around an hour for the jump, but this only fueled our adrenaline. I was psyching myself up, Charlotte was psyching herself out!

What to wear for your Bungee Jump in Macau:

Aside from being given the t-shirt so you can jump in style, it is suggested to wear the following:

As we were called to the outside platform, nothing could have prepared us for the view we were witnessing. The views alone were worth traveling for from Hong Kong.There are many bungees in the world; however, diving into the concrete jungle from the highest platform on the planet is the only way to do it! As the saying goes, if something’s worth doing, it’s worth doing properly! This was definitely the ultimate bungee experience! We were now ready to jump! Charlotte was first, fearing that if she went second she might well still be stood there even now!

One of the great things about traveling as a couple is that you both have your own adventures in mind that you can share with one another. This was definitely one of my adventures! I spurred Charlotte to the edge and in “5,4,3,2,1” she was gone! I was never in doubt that she would jump, but seeing her spread her arms like an eagle and falling into the world around us made me even more eager to experience that very feeling. One of the team handed me a laminate card reading “this is crazy” as I posed for a pre-jump photo. The adventure in hand had now set in, this was it, and without a doubt even for the most hardened thrill seeker, this was indeed crazy! The view, the rush of adrenaline, the sun blazing down and the stage was set. As I edged out onto the platform, the AJ Hackett team warned me of the weight of the bungee cord as it dropped off the edge. I was next! 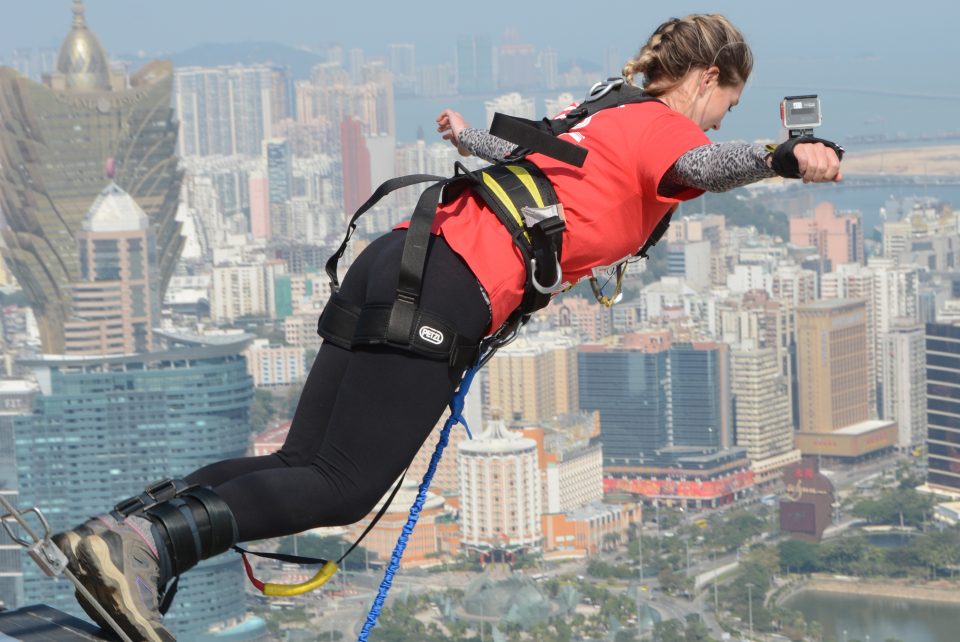 I had studied the built environment at University, however this was a study of buildings like no other!

I elevated my arms in preparation. In the next 10 seconds I was about to get the hit that makes you feel alive and I was quite literally, on top of the world!

5, 4, 3 … that countdown seemed to last forever and your headspace is doing backflips… 2,1… BUNGEE! 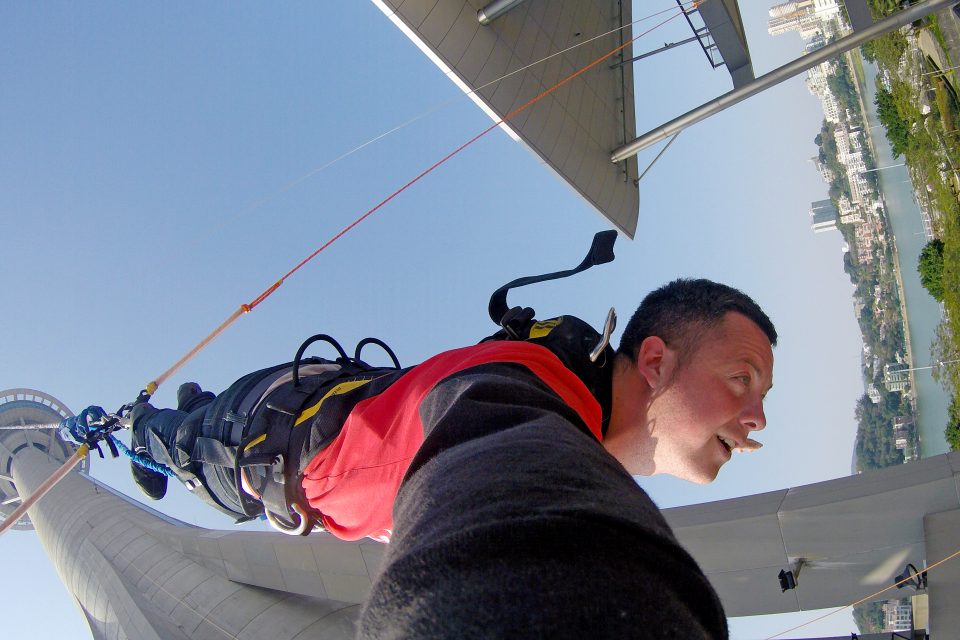 Hurtling toward the ground you pick up speeds of up to 200km per hour; the equivalent speed a jumbo jet needs to reach before take off as it careers down the runway. As you drop face first, the feeling is incomparable. A quick burst of energy and invigoration! After just 6 seconds the bungee cord slows your momentum and you are propelled back toward the sky, bouncing several times before you are brought back down to earth, mentally and physically! 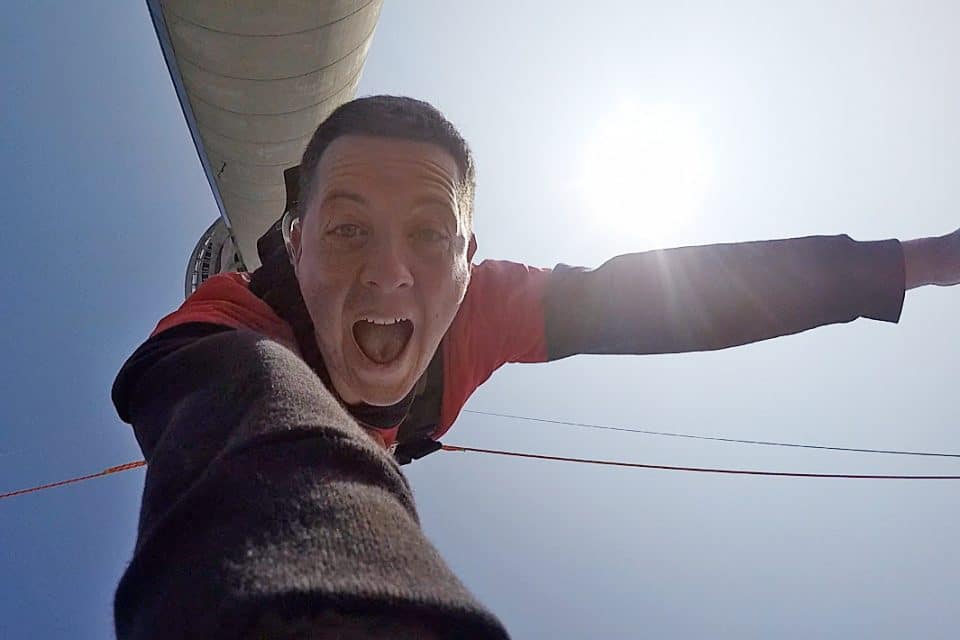 Cost Of The Macau Bungee Package at AJ Hackett

As for the prices, it’s definitely not a cheap thrill but you get what you pay for!

And if one jump just wasn’t enough, after each jump AJ Hackett give you a card to do a second jump for just over £100, something that would be hard to resist should we not be budget travelers.

Driving away from the scene with the tower in our rear view mirror, what we had just accomplished finally sunk in and this was a huge bucket list item ticked off our list! We can literally say, “We’ve been there, done that and got the T-shirt!” 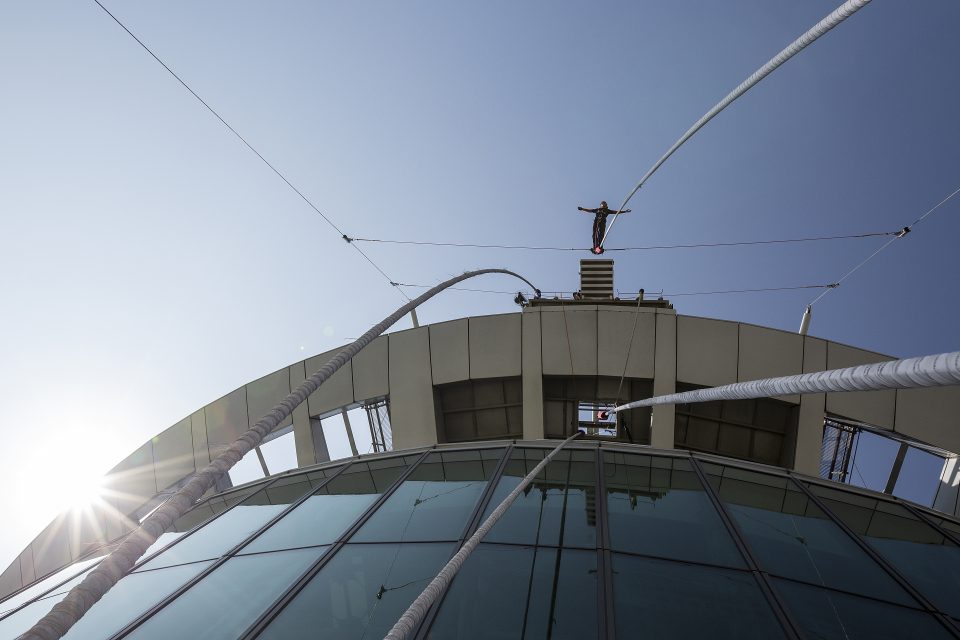 The experience overall was an exhilarating burst of grade A adrenaline. I was a bubbling cauldron of emotions; exhilaration, adrenaline, fear, the unknown. A potion every junkie desires. If only the hit had lasted longer. Any world highest extreme sport can only be described as Don’t Tell Your Mum and this should definitely have been the case for Charlotte, her mum was furious when she showed her the video over Skype … Ooooops!! The height and the views cannot be beaten and we would definitely recommend this to any thrill seeker looking for the ultimate bungee. If you’re not adrenaline junkies like us, you can check out the many festivals and events in Macau to help you find other awesome things to do.

Looking for more adrenaline fueled activities in Asia? Check out these other reviews:

Charlie & Charlotte the founders of TheWanderlovers.com are a wanderlusting couple who have swapped their city life in London for no fixed address. Follow them on their journey across the globe as they travel hand in hand, sharing tips, experiences, pictures and stories to inspire you to dream big and live life to the full. Anything is possible if you just buy that one way ticket...