To those that know our story, you know how it goes. Girl leaves home to travel the world. Boy leaves home to travel the world and in some weird coincidence, we happened to be at the right place at the right time. Because of that split second on the sand dunes where we met, we soon found ourselves having some of the best times together while traveling.

Falling in love while traveling, the seemingly ultimate dream for us nomads and dreamers. After all, who do we have most in common with but other travellers as well? Yes, Tom and I met in the most unusual of ways, but unlike most travel flings and acquaintances, we decided to stay together. Surprisingly, a lot of our readers have asked us how we did it. That was when I began asking myself, “how did we do it?” Did I leave for my trip with the hopes of falling in love? No. Did I plan to meet someone along the way who would end up changing all my plans for the next year or so? No. Am I sorry it happened? Absolutely not.

Read: How to Find the Perfect Travel Partner

Be open to the experience. I learned the hard way that if you keep yourself closed up to new experiences, you might end up missing out on some of the best things that life has in store for you. I used to be a big cynic when it came to love. Yes, I was that friend that would always sigh saying “it’s not worth it, he will be in and out of your life.” I used to wonder why some people would invest so much time in getting to know a person when in reality, your relationship in the future would consist of merely liking each other’s Facebook statuses.

I had this mind set for a very long time until one night, a good girlfriend of mine was crying on my shoulder because of her most recent heartbreak. As usual, I started giving my usual spiel but she interrupted me and said, one of the most cliché lines, but for some reason, that evening, it made perfect sense to me.

WOW. That was when it hit me. People come and go in your life, and no matter how long or how brief, each one teaches you a lesson. When Tom and I met, both of us didn’t think much of it. How could I have possibly thought that the guy I met rolling down the sand dunes would be the same person who I would travel around the world with? But, because I was open to the experience, I ended up getting to know one of the most loving, fun, and incredible human beings that I know.

Read: Things I Learned from being a Solo Woman Traveler

Don’t overthink and stop expecting. BOOM, there I said it. You’re welcome, boys. More often than not, we women get carried away. We meet a guy who we have a wonderful conversation with all night long, and before you know it, three of your best friends already know what he was wearing, what he looked like, and gasp, god forbid, how he even smelled like. Now, I may sound a bit unfair as I was never your typical girly girl, so pardon the generalization. Often times, we overthink situations and set our expectations for it really high.

When falling in love on the road, take a moment to pause and catch yourself before you let your imagination run off. It wasn’t until Tom arrived in the Philippines where I acknowledged the fact that Tom was actually into me. Yes, we had traveled for almost 2 months together prior to that, but sometimes, the best things happen when you least expect it.

We felt the weird urge to get to know each other’s ins and outs. “How do you like your coffee?” “What’s your favourite color?” “What’s the name of your childhood pet?” We talked day and night and laughed at the most mundane things. We got to know each other and made it clear right off the bat what we wanted from each other. We saved ourselves the awkward phase of asking questions like “what are we?” and the infamous, “where is this going?” We decided to go with the flow because ultimately, all that mattered was that we enjoyed each other’s company.

One of the things that we love about each other is that we take the time to get to know and learn from each other’s cultures. In the beginning of our relationship, it baffled me how much bread Tom could eat. Little did I know, he wondered the same thing about me and rice. He taught me Welsh expressions (which made no sense to me) while I taught him some not-so-proper Filipino phrases.

We would fondly talk about how differently we grew up but how similar we both turned out to be. One of the most beautiful things about falling in love while traveling is discovering another culture and way of life as it is shared to you by someone special. To me, there is nothing more endearing that trying to learn a foreign language or dialect, even when you end up mispronouncing every word in the sentence.

Read: What to Expect When Visiting the Philippines

Now, I won’t pretend that we did everything perfectly. Neither will I pretend that I managed to act tough throughout it all. No matter how you put it, Good-byes are hard. As I am writing this, I remember ever so clearly sobbing by myself by the port in Koh Phangan. Tom left on a ferry heading for Koh Phi Phi and I was going to catch a different ferry heading back to Bangkok to catch a flight back to the Philippines. The reality was settling in and I had to face that fact that I might not see him again.

As travelers, this was our reality. I once met a girl who told me a story of meeting a guy and having the most romantic night of her life. They met, ate, danced, and talked all night long. They had one magical night together, but she said dropping him by the airport the next day was one of the hardest things she’s ever had to do. Some connections happen instantly while others pan out through time. When I said goodbye to Tom that day, both of us had plans on seeing each other again, but as travelers, we knew anything could change. Did I secretly wish it would work out? Of course, I did. Did I expect it happen? No. We took it for what it was and were grateful for the memories and experiences that it brought along the way. 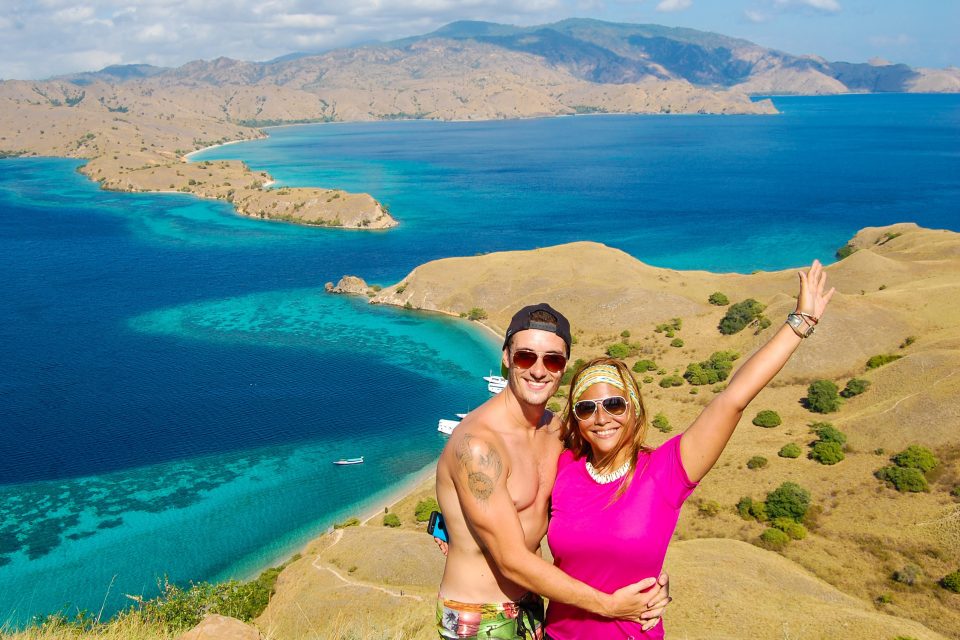 In the end, we were lucky. We were one of the few that actually managed to make our love story on the road work. I admittedly was pessimistic about it all. He lived halfway around the world and was in the middle of an around the world trip. I, on the other hand, had just finished my year-long trip, knowing I had to return to back to the real world of working. But, if you want it hard enough, you can make it work.

I believe that this applies to anything in life. You want something? Work hard for it. At the time when Tom got to the Philippines, I was in the middle of a master’s degree course, working a job that I wasn’t really enjoying. I had almost no savings as I spent it all during my year of travel. He on the other hand still had the rest of the world to see, but somehow, we managed to make it work.

I have heard of long distance relationships that have thrived and succeeded because both ends were determined to be with each other. And yes, there will be times where it won’t work. It will devastate you, and maybe even make you become a lot more cynical. What matters is that you accept the fact that things don’t work out for a reason. Maybe he wasn’t the right one, maybe it wasn’t the right time in your lives. Whatever it was, accept, move on, and embrace your situation. 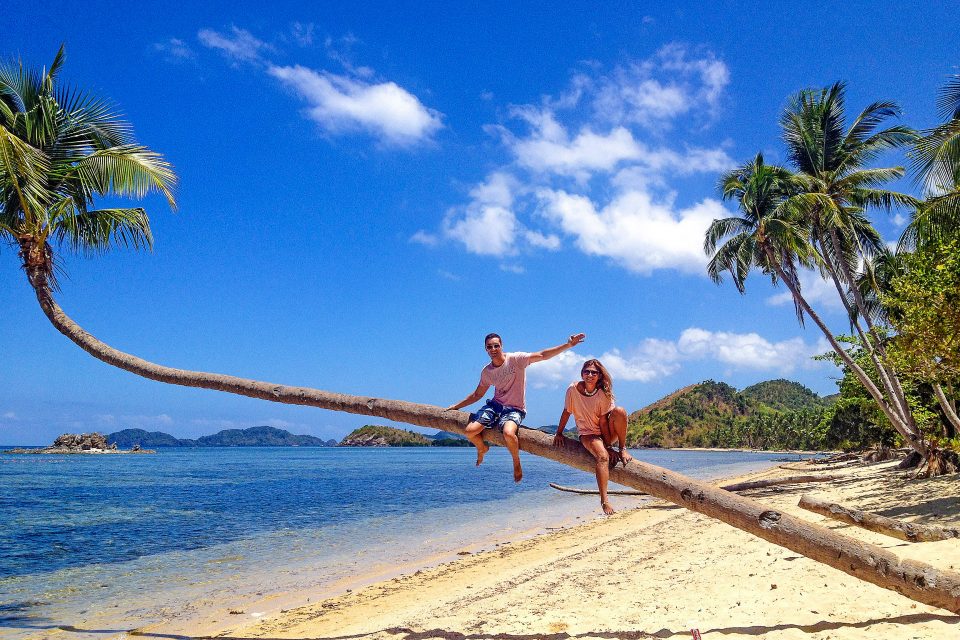 Since we left everything that was familiar to us to once again embark on a journey that would take us around the world, things have been a lot clearer. Although we left our chance for financial security and our life of routine and comfort, we have never been happier. Some call us crazy, some call us brave.

What matters to us is that we are living our lives pursuing something that we love. It is crazy that halfway around the world, there was someone else who wanted the same things out of life as I did. Yes, we argue and disagree, but at the end of the day, there is no one else I would rather be with to experience everything that the world has in store for me. Want more inspiration? Check out this article featuring friendship and love quotes.

Do you have any stories of falling in love while traveling? Comment below, we would love to hear!