Best Things to Do in Córdoba, Spain for a Perfect Day Trip

The large cities of Portugal and Spain get a lot of buzz from travelers. Tourists flock to places like Lisbon and Porto in Portugal, and Barcelona, Madrid, and Seville in Spain. Nestled between Madrid and Seville is a lesser-known city with some of the most exquisite Moorish architecture in Europe: Córdoba.

Be prepared to be wowed as Córdoba is an architectural dream and such a striking departure from the more traditional Spanish cities. It was one of my favorites in Spain, and a must-see in my opinion.

How to Get to Córdoba

Córdoba is located between Madrid and Seville.

It’s around a 2-hour trip from Madrid on the high-speed train or only a 40-minute train ride from Seville, making it a great day trip from either city. Or, you can take a train from Madrid to Córdoba, and end your evening in Seville, which is what I did. I loved it and wished I had an extra day or two to explore as there is so much to see and do.

Travel Must: Alternatively, you can also opt to rent a car. It just gives you so much freedom to explore at your own pace. Click here to compare car rental prices You’ll be surprised at how affordable it is!

Córdoba was a Roman colony (Corduba) founded in 152 BC, and it fell to Muslim invaders in 711 AD. Just a couple hundred years later, it became the largest city in Europe where Jews, Christians, and Muslims mostly peacefully coexisted. It was captured by Spain in the mid-13th century and then underwent a period of decline.

Córdoba’s architecture reflects a blend of the cultural groups (Roman, Visigoth, Islam, Judaism, and Christian) that occupied the area. It is known for its talented artisans in leather, tile, and silver. The Jewish Quarter of Córdoba is now a UNESCO World Heritage Site, recognizing the historic center for the outstanding examples of religious architecture.

Top Things to Do in Córdoba on a Day Trip

There are some magnificent structures to visit when you’re in Córdoba, along with a wander through the old Jewish Quarter. You can do this on your own or find a local walking tour. If you’re a bit of a history nerd like I am, definitely consider a day tour. You can learn a lot more about this amazing city exploring with a local.

There are a number of free tours, and I have found them to be wonderful as the tour guide receives payment only in tips. How’s that for motivation?

Marvel at the Mosque-Cathedral of Córdoba (Mezquita-Catedral)

The Great Mosque of Córdoba, also known as the Mosque-Cathedral or the Mezquita, is the largest mosque in the world and the best-known building in Córdoba. It was built in 785 AD on the ruins of a church and has been enlarged and embellished since it was originally constructed. 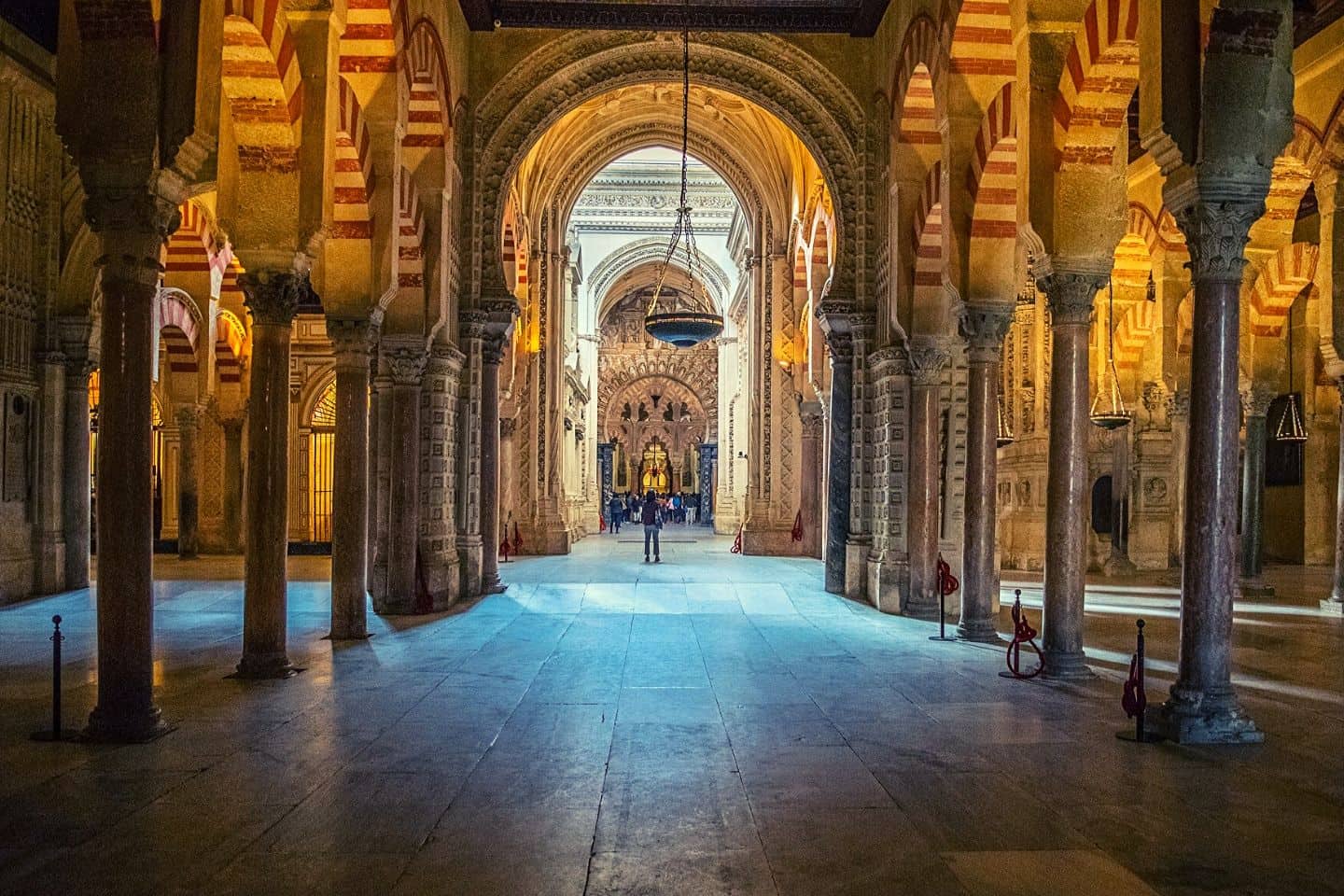 The Mezquita-Catedral is one of the most incredible examples of Islamic art in Spain.

After the Christian conquest, a Renaissance cathedral was erected in the center so it is now a blend of Moorish and Christian architecture. Its opulence is magnificent, and it is worth spending as much time as you can here. Tour the great hall with the detailed stone arches, the Patio de Los Naranjos courtyard, and the Bell Tower.

The entrance to the Jewish Quarter (La Judería) is through the Almodovar Gate. When you enter, you are in the historic center of Córdoba. This neighborhood is a UNESCO World Heritage Site which includes many of the historical monuments that attract visitors to this city.

This was once a vibrant Jewish community from around the 10th to the 15th century until their expulsion from Spain by King Ferdinand and Queen Isabella. This happened in 1492, the same year that Christopher Columbus made his maiden voyage seeking western route to the Far East.

The Jewish Quarter is now a bustling area with many shops and restaurants, though there are still reminders of its history in the street names like Calle Judios. There are also some signs and statues throughout the quarter reflecting the history of this area.

It is a lovely maze of narrow streets and beautiful courtyards with lots of shade from the strong southern Spain sun.

The Alcázar was a medieval palace built in the historic center of Córdoba near the Mezquita. It was once a residence for the Spanish Catholic kings. During the reign of Queen Isabella and King Ferdinand, it became the headquarters for the Holy Office during the Inquisition, and the main tower was known as the “Tower of the Inquisition.” 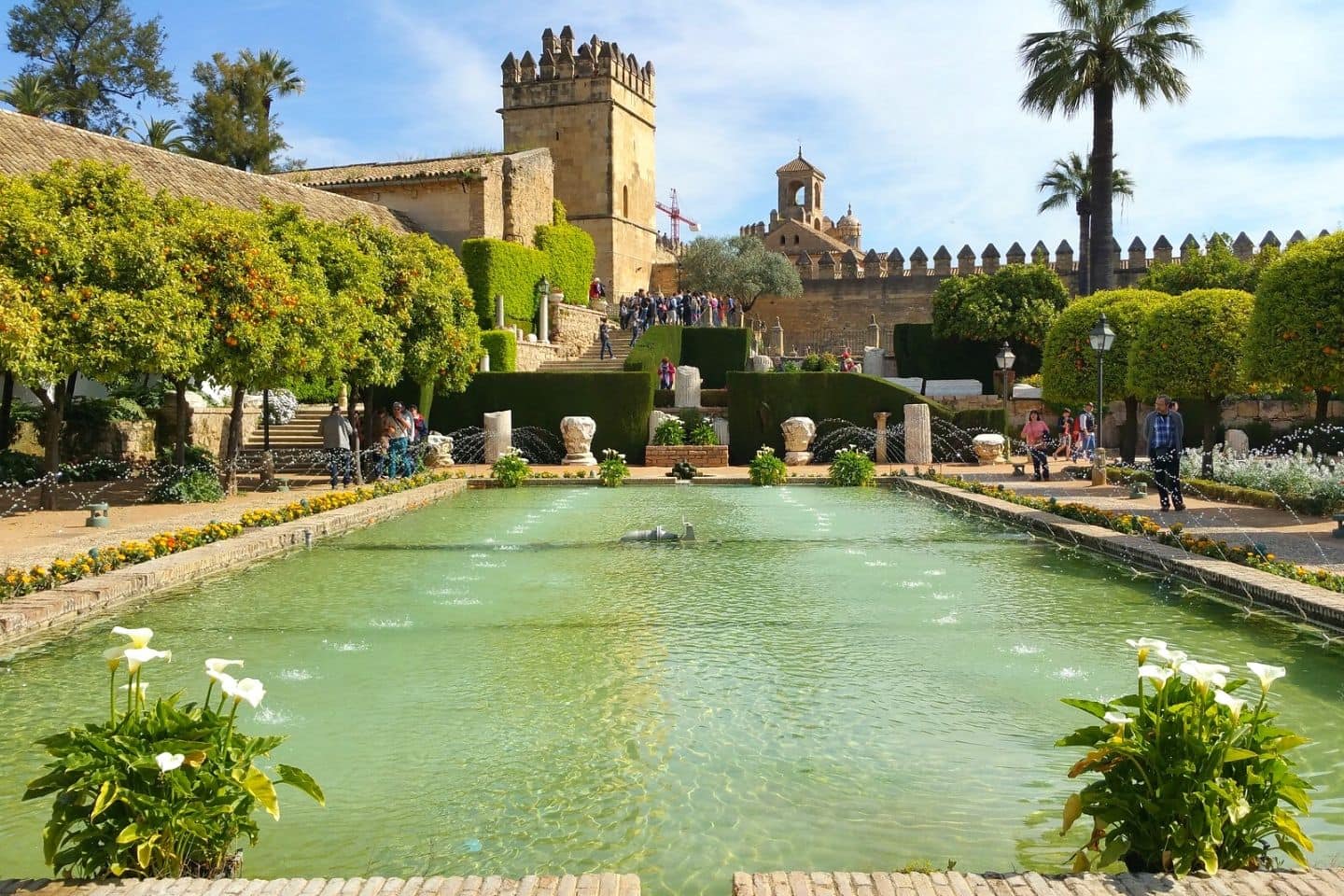 There is a large and magnificent outdoor garden surrounded by the four towers of the Alcázar. The garden is one of the highlights of the building. It features large paths lined with cypress trees, beautiful fountains, ponds, citrus, and palms. It’s hard to believe you’re in the center of a city while in the garden, though you can climb the towers and walk along the ramparts to enjoy city views.

The main hall is known as the “Hall of Mosaics” for the stunning mosaics covering the walls. There are also royal baths and two beautiful courtyards. The building is impressive, though the gardens and the mosaics are the true highlights.

The Córdoba Synagogue is the only remaining Jewish Synagogue in Andalusia and one of the best-preserved remaining in Spain.  Due to its small size, it may have originally been a private synagogue for a wealthy family.

Located in the heart of the Jewish Quarter, it served as a temple until the Jews were removed from Spain during the Spanish Inquisition. The Synagogue was then used as a hospital and a school before it became a recognized national monument in the 19th century.

Though the building is small, there are some intricate carvings and scrolling work on the walls. There are also Hebrew inscriptions on the interior walls and beautiful scalloped archways. It is worth getting a guided tour if you’re interested in learning more about the history of this synagogue and the Jewish Quarter. 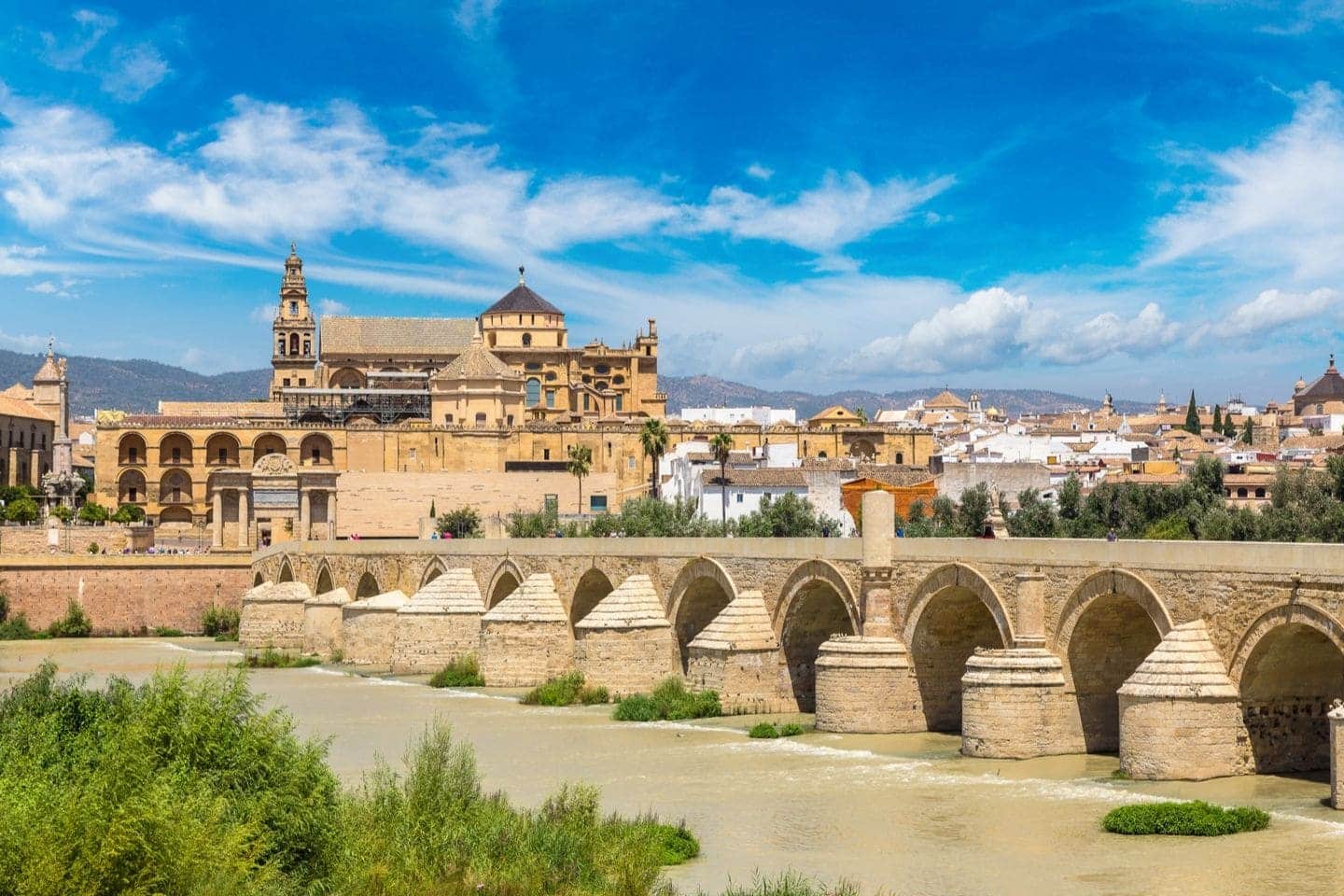 In the 1950s, the remains of a Roman Temple dating back to the 1st and 2nd centuries was found. 10 marble columns remain and you can see them today. Built around the same time, the Roman bridge is a famous Córdoba landmark. It has 17 stone arches and provides great city views.

At the end of Puente Romano, you will find Calahorra Tower, a large tower built during Muslim times.

What else is there to do in Córdoba? Well, eat of course!

Definitely check out some of the local tapas bars while you’re here. The good ones may not look impressive from the outside, but you will find them packed with locals. Tapas is a tradition in Spain, and one I highly recommend.

Don’t leave without tasting salmoreja, a traditional dish that is perfect for the hot weather. It’s a cold tomato soup made of olive oil, garlic, vinegar, bread crumbs, and has bits of serrano ham and eggs sprinkled on top. It’s like a substantial gazpacho, and originated in this area.

Walk this narrow street in the old quarter to enjoy the beautiful patios and lots of gorgeous flowers. It’s a very picturesque area that attracts a lot of tourists. So, if you want to go, I recommend going early or late to avoid the crowds. 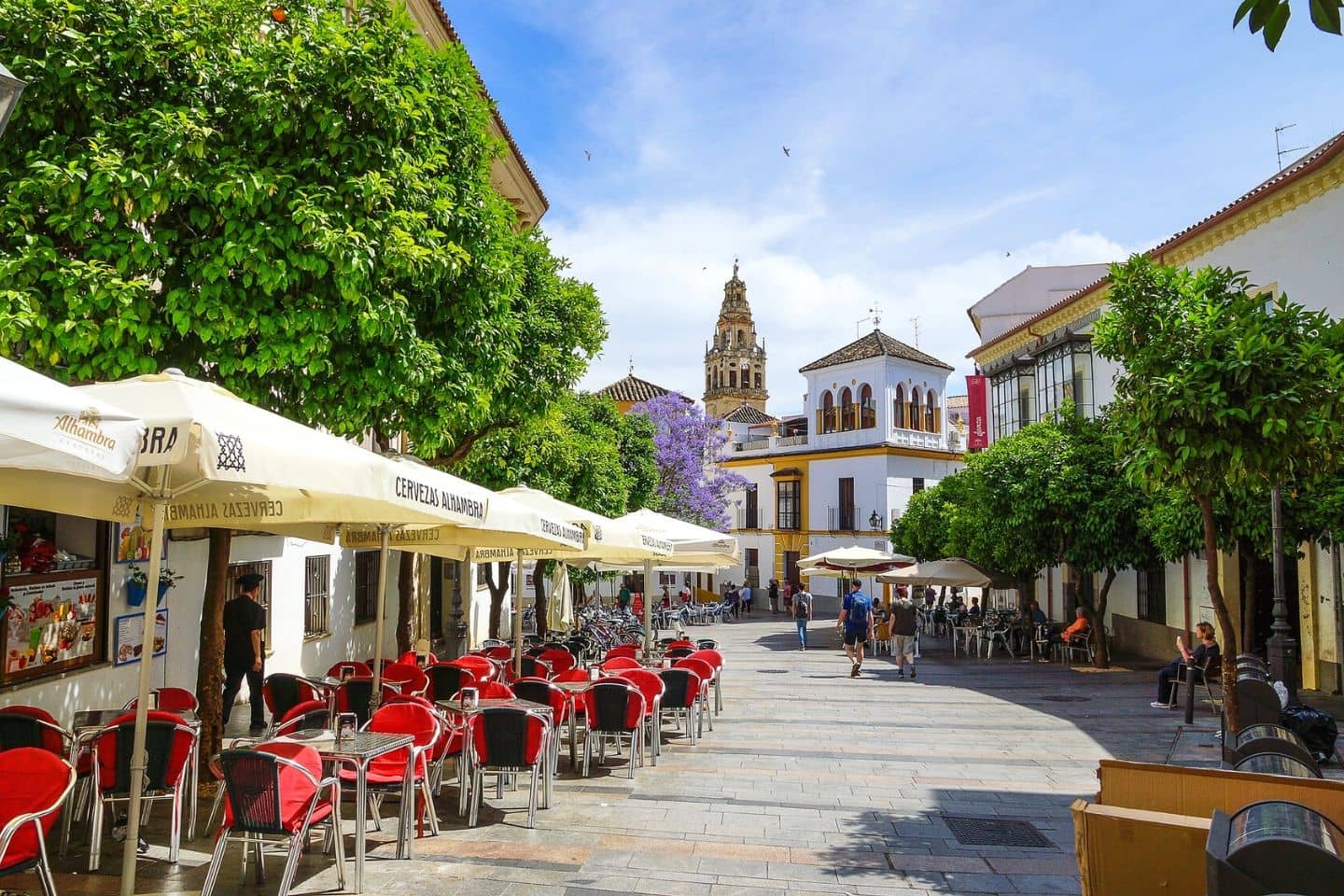 Recommended Itinerary for One Day in Córdoba

If you have additional time and can do an overnight in Córdoba, consider exploring more of this amazing city.

Córdoba is great day or overnight trip from Madrid or Seville. It features an incredibly beautiful and well-preserved historical center and some true architectural masterpieces.

The uniqueness of this area makes Córdoba a great place to visit when you’re in Spain.

If you are looking for more tips on where to go in Spain, check out our Spain travel tips article which features itineraries, what to eat, where to stay, and more.

Looking for more on Spain? Check out these articles 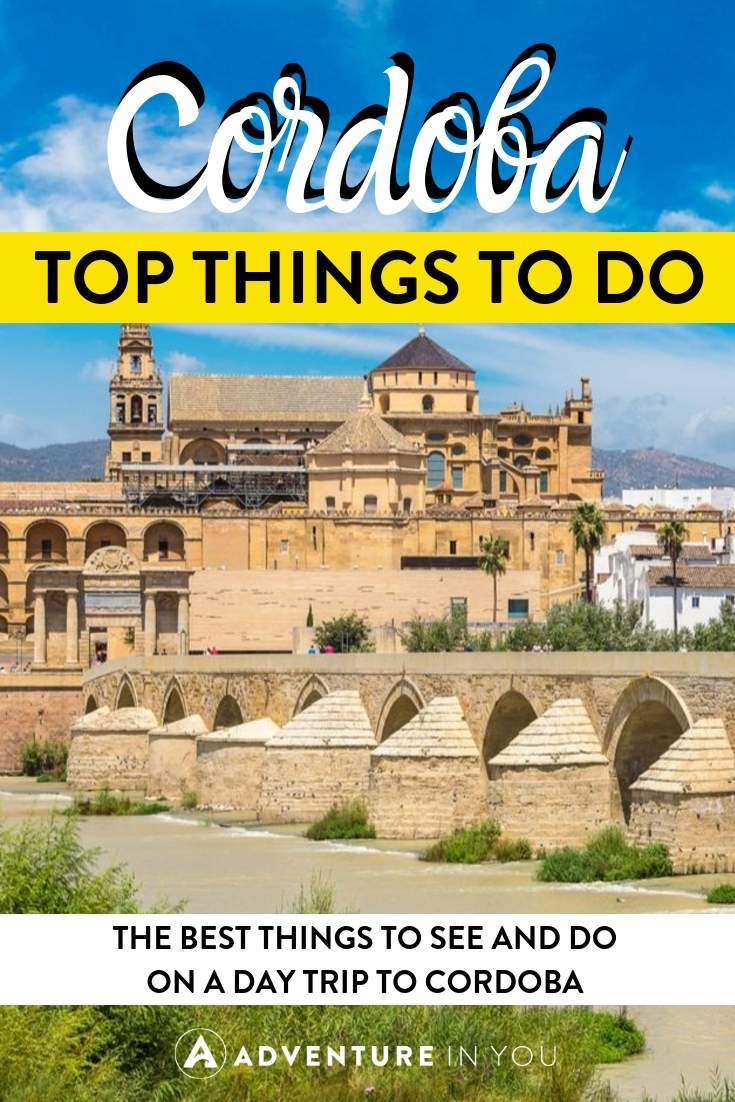