Bungy Jumping was never something I never really had any plans to do. It’s funny for me to say that, being the adrenaline junkie I am, but there you go. I don’t know about you, but the idea of throwing yourself off a building with only a bungy rope for safety, and the potential for a very hard, concrete landing, just never filled me with excitement.

I figured that I would probably do it one day – as I count it as one of the top things to do when people think of extreme/adventure activities like sky-diving, white water rafting, zip-lining, or even diving with sharks.

We had considered doing the Skywalk/SkyJump at the Skytower, but funds were limited at the time and the Bungy was cheaper – not usually the way I like to make a decision about an activity that has a (very small) chance of killing me! I also think I was drawn to the Bungy because it was a ‘water jump’ – as compared to the concrete landing awaiting you from the SkyJump. I know, I know – completely irrational thoughts as both activities are perfectly safe – but it is weird what factors you consider when trying to decide whether to throw yourself from one great height or another. 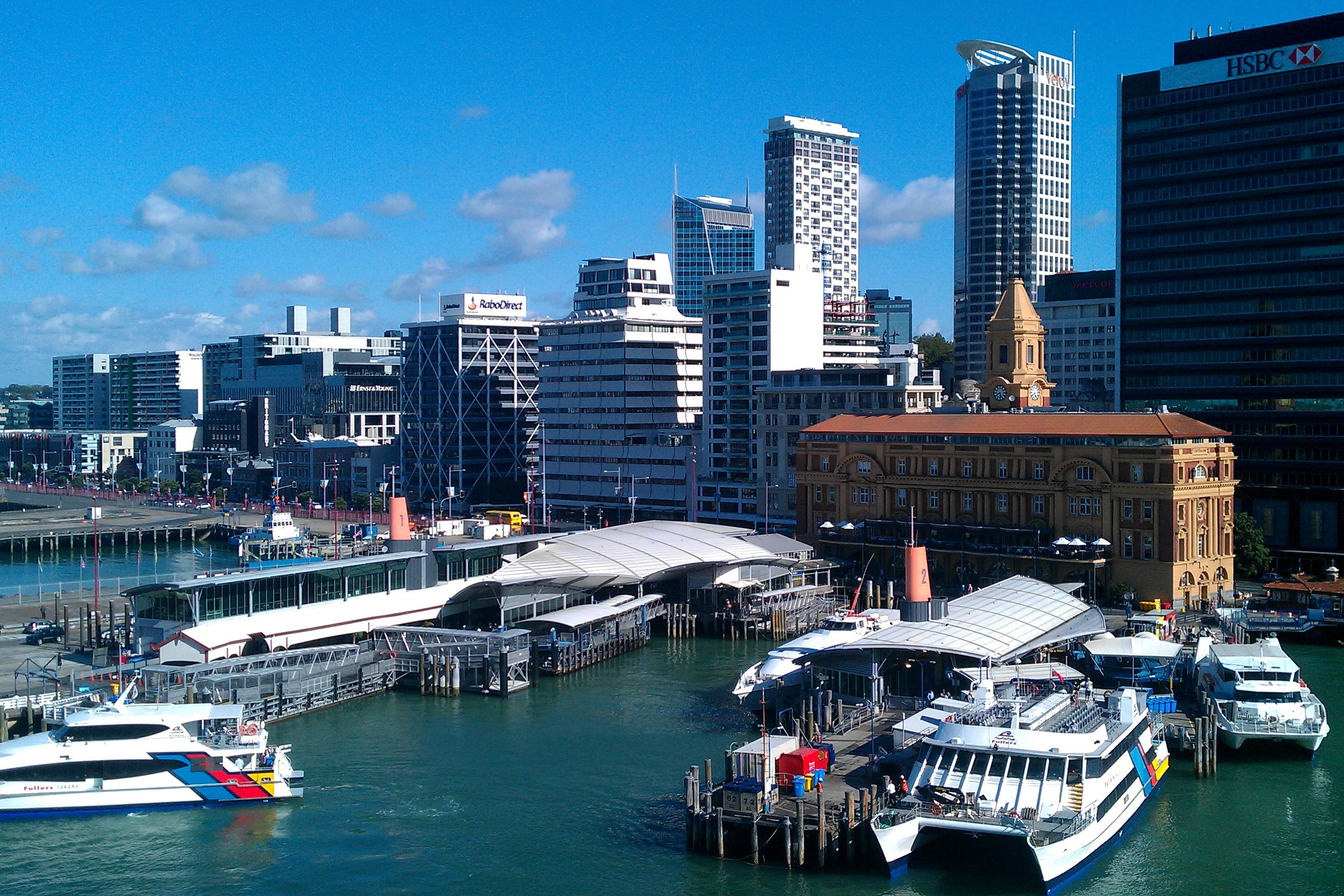 One jump will cost $160 NZD for an adult and $130 NZD for a child and includes the jump, a certificate to prove you did it and a T-Shirt so you can wear your accomplishment with pride. Spectators are also welcome and can pay $20 NZD to watch the jump from the platform with you.

Read: What NOT to do When Bungee Jumping

On the day of our jump, the weather still wasn’t too nice (resulting in very grey and dull photos) but one exciting aspect of the Harbor Bridge Bungy Jump is that you get to walk through the structure of the bridge to get to the landing/launching point. This was very cool. Before setting off we were dressed in our harnesses and given hard hats before being attached to the safety wire. We then dutifully followed our ‘jump master’ (and the rest of the group) through the structure of the bridge, stopping when we reached the central platform.

Once at the launch site, you are weighed and measured in a practical – how tall are you and how much do you weigh so we can accurately ascertain the correct weight and tension required to ensure you have the perfect jump – kind of way. They even wrote your weight on your hand in permanent marker. I think this was so those of who were a little modest about our weight could alter the number to make our selves lighter – and obviously from a safety perspective – they need to know to keep you safe! 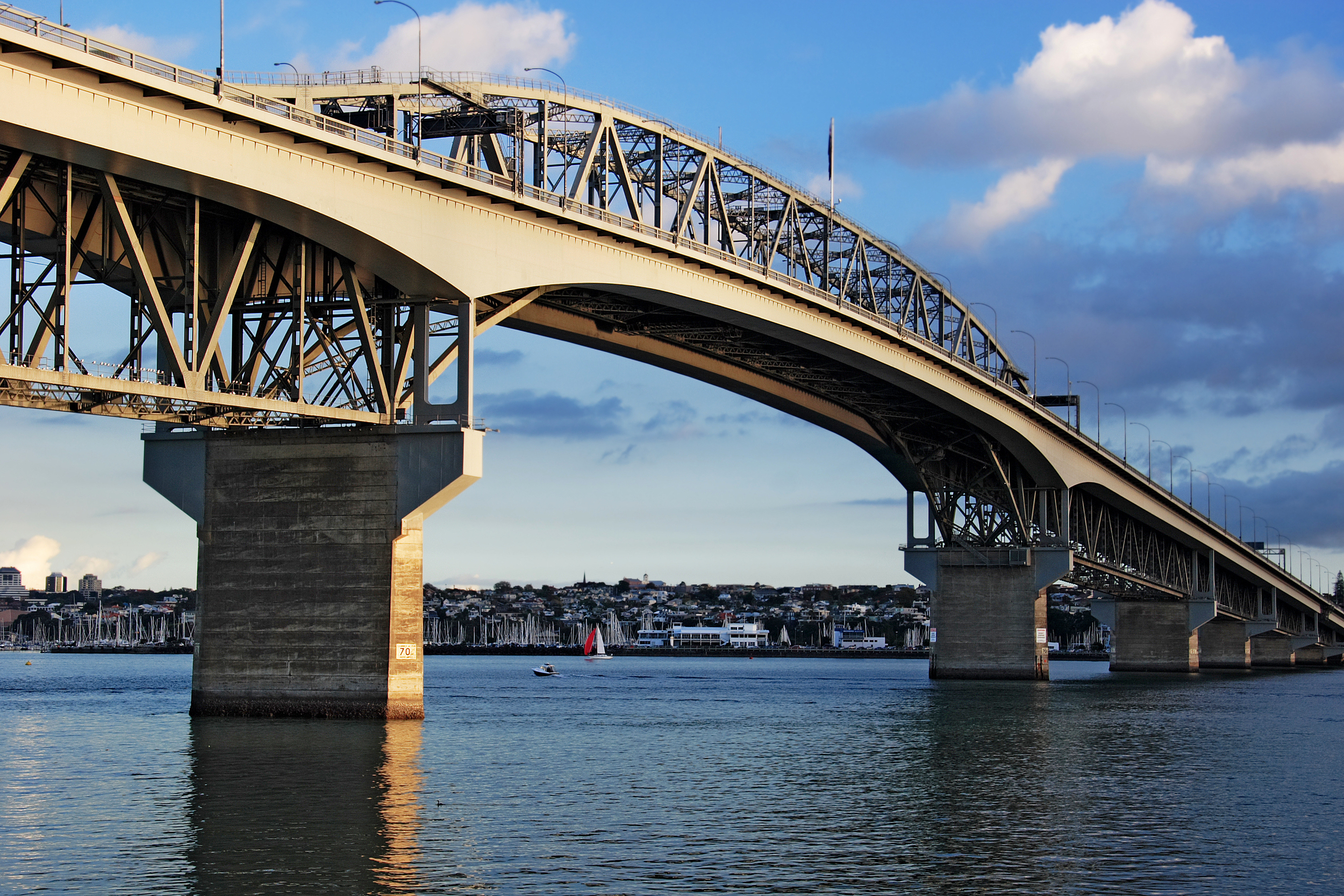 You then wait your turn – or feel free to go first if you’re in a courageous mood (I like to see other jump and come back up before I went ahead-but that’s just me!) Then, you will be asked to sit in the ‘ready to jump’ seat where after they let you know the options available to you. You can jump forwards, backwards or in tandem and you have the opportunity to touch the water (or be dunked in the water!) – if you would like. As The Auckland Bridge Bungy is the only Bungy option in New Zealand where you can touch the Ocean, I decided that the ‘water touch’ would be the option for me. Following my instructions, the tension of the bungy was adjusted to accommodate my request and then these almighty weights were attached to my ankles. From my picture you can see I was pretty OK with the whole thing to this point.

Then comes the start of the scary bit. When you get down from the chair you immediately notice the weight around your feet and are forced to shuffle to the jump point. The Bungy staff help you along – and reassuringly – keep hold of the back of your harness so you can’t accidentally shuffle off the platform for an impromptu jump ahead of schedule. The thing with jumping off a bridge over the ocean which leads to a harbor – is there are often boats passing underneath you – and you don’t want to jump straight into one of these! It’s nothing to worry about, and the staff monitor the screens on the platform before they allow anyone to jump, but it does add a little extra fear element. So much for my soft water landing.

Related: Top 5 Highest Jumps in Asia That Will Make You Sh*t Your Pants

As you stand teetering at the edge of the platform the staff give you a few pointers about the best way to jump – out as far as you can with your arms spread at right angles to your body and keep your legs together – not that you have much of a choice on that one, with them being strapped together!

And then the countdown beings. 5, 4, 3 – you can feel the adrenaline coursing through your veins as you find yourself still questioning whether you can actually do this. 3…2…1… 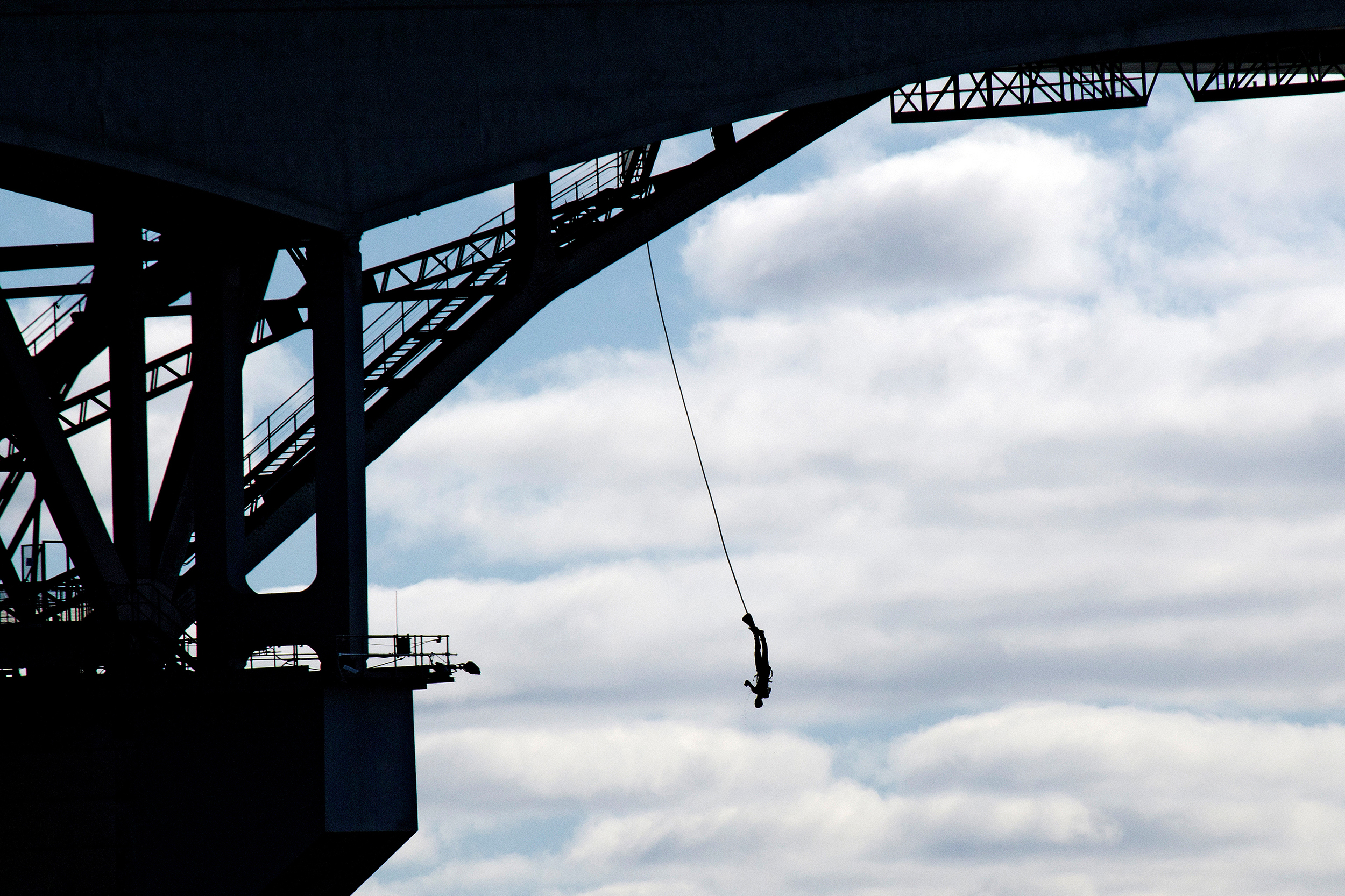 And I jumped….It was magnificent! In fact, it was called as one of the best of the day by the staff (or they may say that to someone in every group – but hey, I liked the praise) And it did look good, didn’t it?!

It was an exhilarating feeling, plummeting towards the water at great speed – the smile on my face was from ear to ear – and to top it off, my fingertips were about to graze the water. Amazing! Unfortunately, I didn’t get the water touch that I was expecting. Oh no. The staff, it seemed, had decided that it might be amusing to give me a bit more than a fingertip touch. As my head and shoulders disappeared below the surface, to say I was surprised was an understatement. My smiling mouth was filled with a large mouthful of the ocean on the way down and I had a very ungracious splutter as I was bounced back into the air by the bungy rope. A few bounces later and after waving/chatting to a few passing boats, I reached up to my ankles and pulled the rope to turn my harness into a seat, which was then raised back to the platform. I can’t recommend the guys over at AJ Hackett enough and would a repeated jump if I had the chance to.

Want to read about other adventurous articles? Check out a few of the articles below

Vicki Garside founder of MakeTimeToSeeTheWorld.com, is an experience hunter on a mission to try everything this world has to offer. Living on the road for 4 years she worked for Walt Disney World in Florida (USA) and ran 5 different hotels in the French, Swiss & Austrian Alps before settling in Melbourne Australia. A travel planning mastermind she aims for global domination from her office cubicle – and with 33 countries visited so far, she is well on her way!

2 thoughts on “Bungy Jumping off the Auckland Harbor Bridge”