Diving in Komodo National Park! A dream come true for every dive enthusiast. It’s well preserved waters attract a lot of tourists every year to relish in their diverse marine bio diversity.

We were no exception to the rule as despite our tight time frame due to visa reasons we knew we had to make it to Flores. So we boarded a boat from Lombok and made our way to Lubuan Bajo.

Given that we only had 3 days before we had to leave Indonesia for visa reasons, our first mission was to find a good dive school. After walking around and seeing our options, we decided to go with Uber Scuba Komodo.

They were highly recommended, and true enough, upon checking their trip advisor, we saw nothing but good reviews. We went into the shop and was pleasantly greeted by everyone. All the information we needed was given to us and we felt very comfortable with everything so we decided to book 3 days of diving with them.

The Cost to Dive in Komodo National Park

1,400,000 rph per day for 3 dives this included all gear and equipment (which were all brand new), hot lunch, coffee and tea, cold water, and snacks (This price is from August, 2015 so best to check their website instead).

250,000 rph on special holidays and the weekend

This fee has to be paid daily which luckily, Uberscuba arranged for us. Before 8, we are on their boat happily munching on donuts, sweet bread, and coffee.

Insider Tip: Looking for a place to stay while in Labuan Bajo? Check out article for our personal recommendations on where to stay: Best Places to Stay in Labuan Bajo, Flores 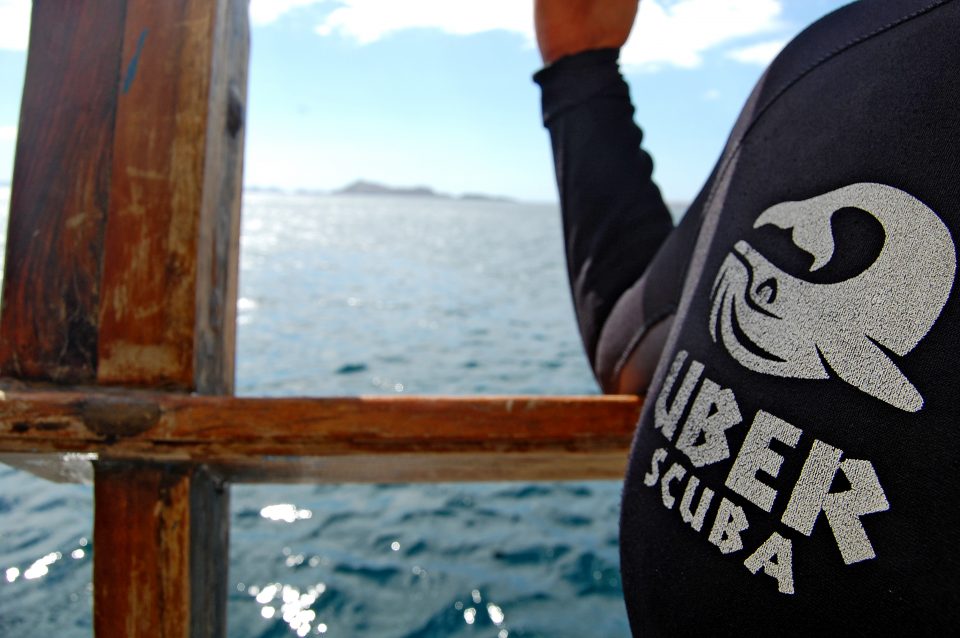 The Boat and Equipment at Uber Scuba:

Their boat was one of the best ones on the harbour as it was large, roomy, had a great sundeck, a large table where we had our dive briefs and meals, and a deck for just the dive gear. I spent quite a bit of time falling asleep on the sundeck while reading books in between dives and on our way back to the town port-it was awesome!

They also had speed boats that assisted us during the dives which made it so much easier given the strong currents. The fact that their equipment were all brand new also reassured me. Our dive master, Adrienne sat us down and introduced the boat to us.

She also gave the most comprehensive dive briefs ever. She explained each site, drawing them out carefully, explaining what we had to do, and more importantly, how to go about diving those sites. A lot of the diving were quite technical as they all had currents due to the time of the year that we went.

Read: Top Snorkeling and Diving Spots in Asia that Will Blow You Away

Diving in Komodo was admittedly trickier that we thought. Most places we went, had an INSANE current. To be honest, I was (still am) scared sh*tless of currents. After a bad diving incident which happened a couple of years ago in Palawan, every time I hear the word current, I freeze up. Initially, I wasn’t too scared as Adrienne explained everything really well.

On the first dive, I had problems entering the water. We were supposed to do a negative entry and swim our way past the current to hold on to some rocks to watch “the sweet spot” where all the action was taking place.

No matter how hard I tried I wasn’t going down! I even added weights (6kgs!!!) but the combination of me trying too hard and getting frustrated got the best of me.

I went back to the boat feeling like a kid who wasn’t allowed in the candy store. After the dive, two members of Uber scuba went up to me to talk through what happened and reassured me that I was fine.

Tom however, resurfaced from that dive like the happiest kid in the world. Just by holding on to that sweet spot, they saw TONS of giant fish and a massive grey reef shark. 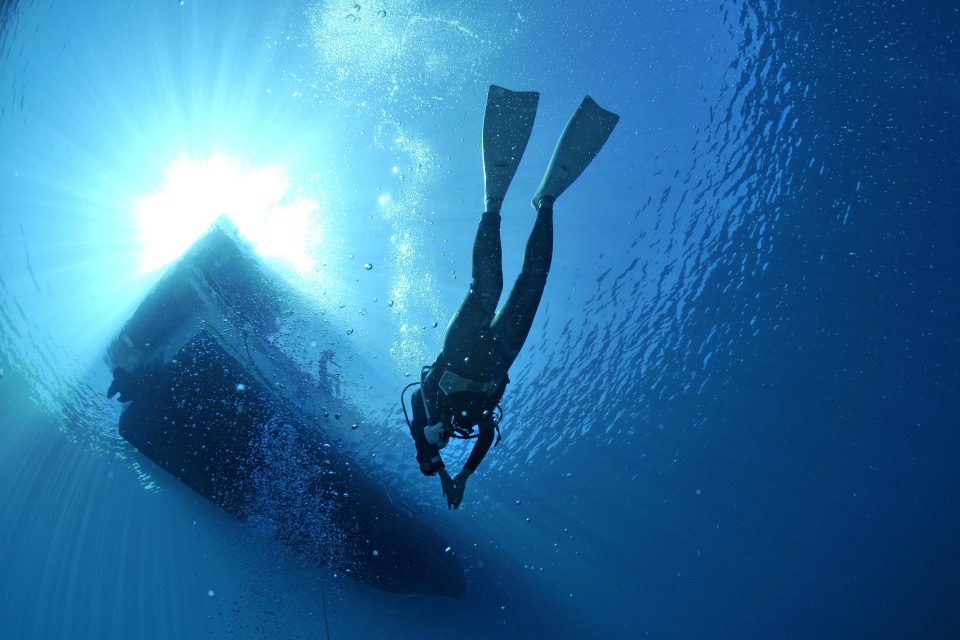 The rest of the days went by so quickly as each day, we were amazed, mesmerized, and left in awe of how beautiful everything was. In every dive we saw black tips, white tips, and grey reef sharks, loads of turtles, giant trevally and tuna, and other awesome creatures.

It was like being in an aquarium to a point that I didn’t know where to look as there was too much going on around me. The currents were strong and tricky, but the dive masters and guides knew how to read it and where to go.

This only highlights the importance of choosing a good and reputable dive company. Some dive sites like Tatawa Kecil are only good to dive during the slack in the tide as the currents make it difficult to enter.

On our first day, after our last dive, there was a huge commotion. We loaded into Uber scuba’s speed boat and drove to a nearby island where there were GIANT MANTA RAYS feeding. We jumped in with our snorkels and swam for about ten minutes while 12-15 giant manta rays swam around us. Some were even larger than us! It was INCREDIBLE. 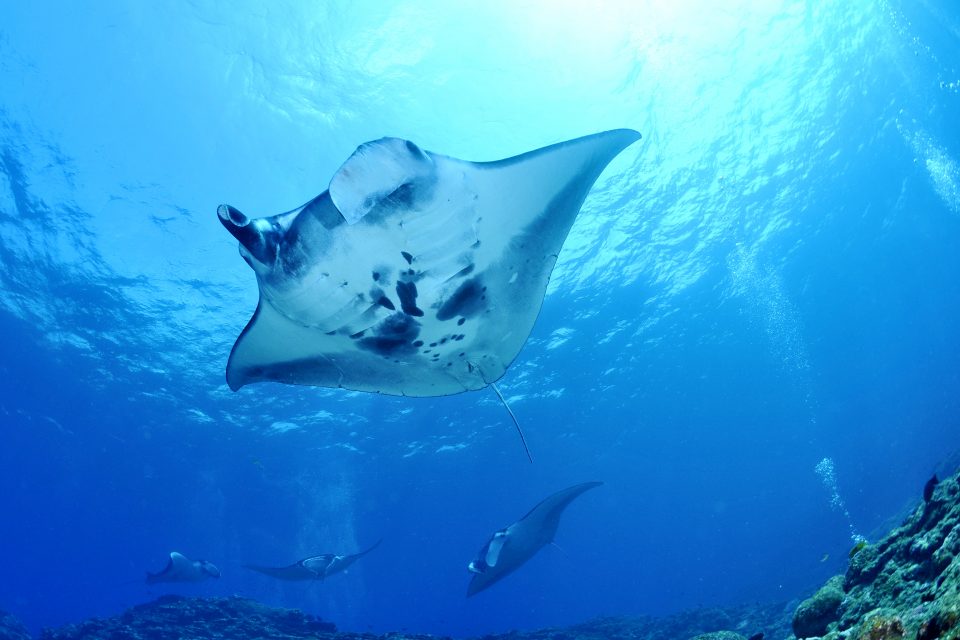 To be honest, every dive was pretty spectacular! One of our favorites though was Batu Bolong was also pretty amazing! We dove that site two days in a row and despite the insane currents, it was amazingly beautiful!!! If you can choose dive sites, try to experience diving in the three C’s as they had the most wildlife and action.

Apart from that, Batu Bolong and Tatawa Kecil were high up on our list. Sunsets on the boat were also pretty spectacular, especially if you see dolphins-which we did almost every single trip back!

For more information on Uber Scuba Komodo, check them out at:

Please note that some services from Uber Scuba Komodo were complimentary but all opinions are ours and remain completely unbiased.