Croatia has fast become one of Eastern Europe’s top destinations, famous for its flawless coastline, turquoise Adriatic Sea and ancient cities. While crowds still flock to popular Dubrovnik, dubbed the ‘Pearl of the Adriatic’, Croatia’s second-largest city Spilt is just as magnificent.

The UNESCO World Heritage Site is stuffed with history and ideally located on the Dalmatian Coast near some of Croatia’s most stunning islands. From exploring ancient Roman palaces to hiking nearby mountains and chilling by the sea, here are 10 top things to do in Split.

Split is packed with ancient buildings that date back to Roman times. The Old City is surrounded by crumbling walls and four gates named after the metals bronze, gold, silver and iron. Windy, white-stone streets lead to Split’s most famous site, the palace of Diocletian, a Roman Emperor who reigned in the 4th century AD. Today, you can explore the palace’s underground ruins and visit the market in the palace cellars.

In the palace courtyard, you’ll find Peristyle Square, which is surrounded by columns and cafes. This is also where the Cathedral of St Domnius sits, with its 57-metre-high bell tower which dominates Split’s skyline. Climb up the tower’s spiral staircase to get views over the red rooftops of Split out to its port and the sea.

Wander around Split to discover more of its ancient treasures, including impressive examples of Baroque, Venetian and Renaissance architecture. Check out Rodic Square with its octagonal tower and palace, the 17th Century Cindro Palace and the Piazza, or People’s Square, where you’ll find an ancient clock tower.

Get your Hike On

Love to hike? Then you don’t have to look far for trekking options in Split. The city is surrounded by three mountains, Kozjak, Perun and the tallest, Mosor, which peaks at 1,339 metres above sea level. You can hike up Mosor on a day trip to enjoy views over the sparkling, island-speckled Adriatic Sea, as well as the dramatic Mosor mountain ridge.

Related: Things to do in Zagreb 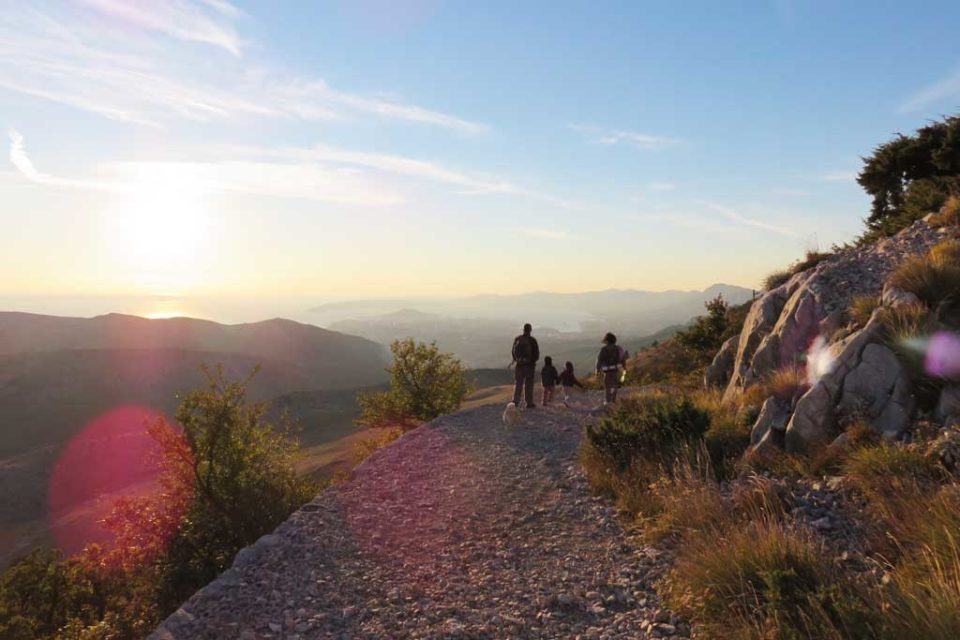 Watch the Sunset in Marjan Park

One of my favorite things to do in Split is to watch the sunset. There’s no better place to get aerial views over Split than at Marjan Forest Park, a nature reserve full of pine trees, scenic trails, and viewpoints. From the Riva, go past the clock tower and climb a flight of steps leading up to Marjan. You can spend a whole day exploring the park, which is dotted with medieval chapels, churches, a Jewish cemetery, and caves that were once used by Christian hermits. For the most incredible sunset views over Split head to Telegrin, Marjan Hill’s peak, which lies 178 metres above sea level and is marked with a Croatian flag.

Have a Beach Day

Split sits on the Dalmatian Coast, which has some of the best beaches in Croatia. Most are pebbly with clean, calm waters. Bacvice Beach just outside of the Old Town is a rare sandy spot and an ideal place to relax after sightseeing, take a dip and watch locals play football. From Bacvice, a path stretches 10km east and is laced with numerous beaches including Ovcice, Firule, and Znjan.

Go on a Day Trip on the Dalmatian Coast

Rent a car and drive to the nearby Roman ruins of Klis and Solin, then head to Primosten, which is known as the Monte Carlo of Croatia. The UNESCO town of Trogir is just an hour up the coast from Split, located on an island connected to the mainland by a bridge. Explore the town’s medieval fort, cathedrals and mix of Roman, Renaissance and Baroque architecture. If you love waterfalls, don’t miss Krka National Park, which is also just an hour’s drive from Split. Here you’ll find hiking trails through shady forests, crashing waterfalls, caves and limestone karsts. 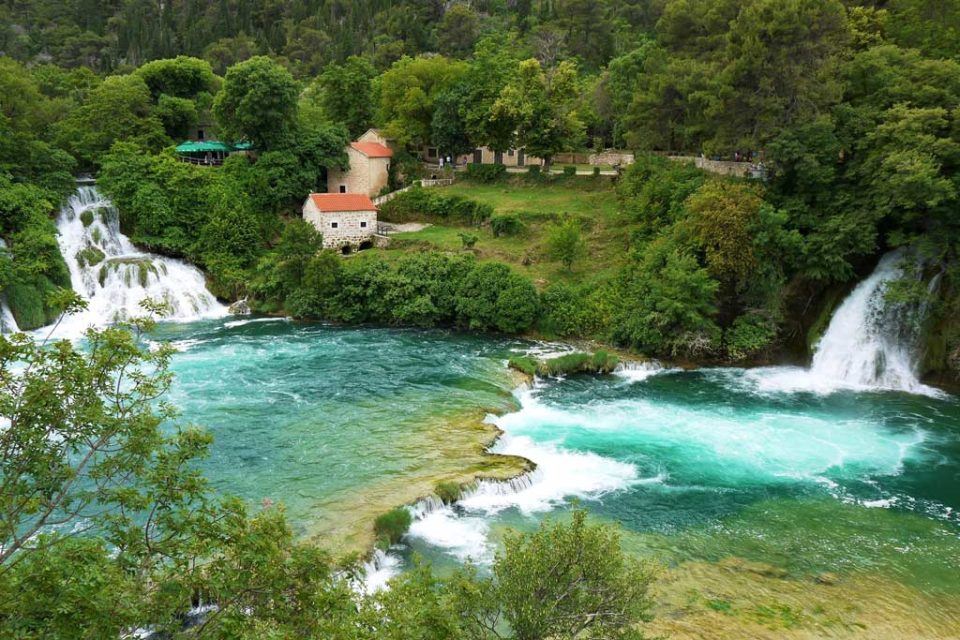 For a real adventure, take an afternoon trip from Split to the nearby Cetina River to do some canyoning. You’ll be surrounded by mountains up to 180 metres high as you explore the canyon’s unique rock formations, rapid slides, waterfalls, subterranean tunnels and natural pools. The two levels of the canyon are separated by the staggering 50 metre high Velika Gubavica waterfall.

Just a few miles off the coast of Split you’ll find the idyllic islands of Brac, Hvar, Vis, and Solta. Each island is accessible by ferry and has its own character and heritage. On Solta, for instance, donkeys are the main form of transport and the island is known for its traditional Croatian way of life. Brac is famed for its white-stone and Vis, which was shut off from visitors during communist times, is unspoiled and wild.

On all of the islands, you’ll find long pebbly beaches and coves, mountains with forts, monasteries, colonial buildings, and churches. Spend an afternoon on Croatia’s most famous beach, Zlatni Rat, which lies on the island of Brac. The beach is shaped like a thin spike that juts out into the topaz sea and is a great place to sunbathe and watch the wind and kite surfers. 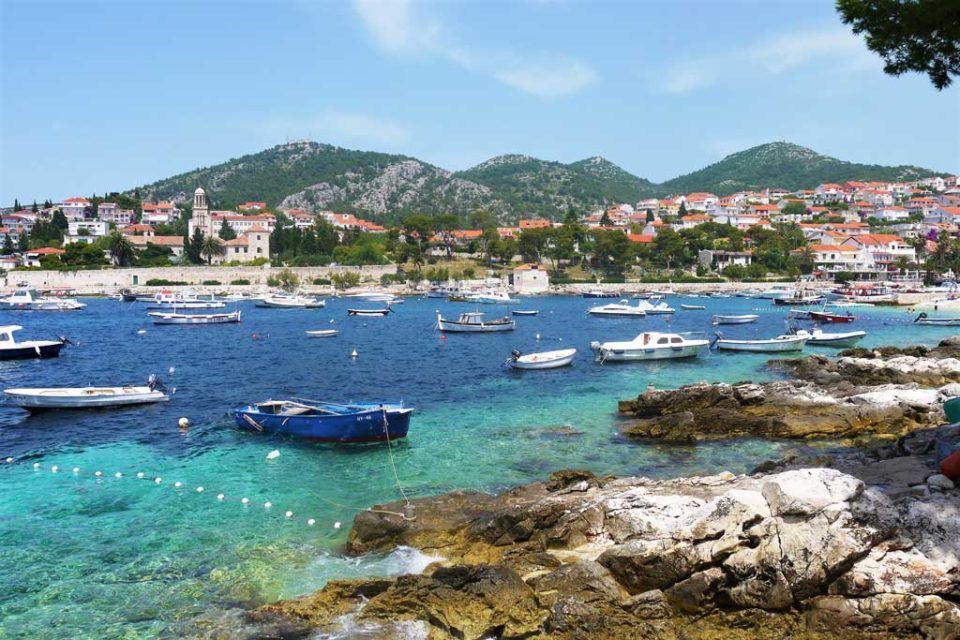 Stroll along the Riva

The Riva is Split’s scenic promenade which is lined with bars and restaurants, crepe stalls and ice cream parlours. This is one of the best spots in the city to chill out with a drink and watch local life swirl around you. Boats advertising tours to nearby islands and sea kayaking trips bob on the waterfront, where you can organise day trips.

Visit One of Split’s Museums

With its ancient roots, it’s no surprise that Split has plenty of museums where you can learn about the city and Dalmatia’s history. Top picks include the City Museum of Split near Diocletian’s Palace, and the Archaeological Museum that showcases artifacts dating back to prehistoric times. It’s also worth taking a look at the Ethnographic Museum and Split’s many art galleries. 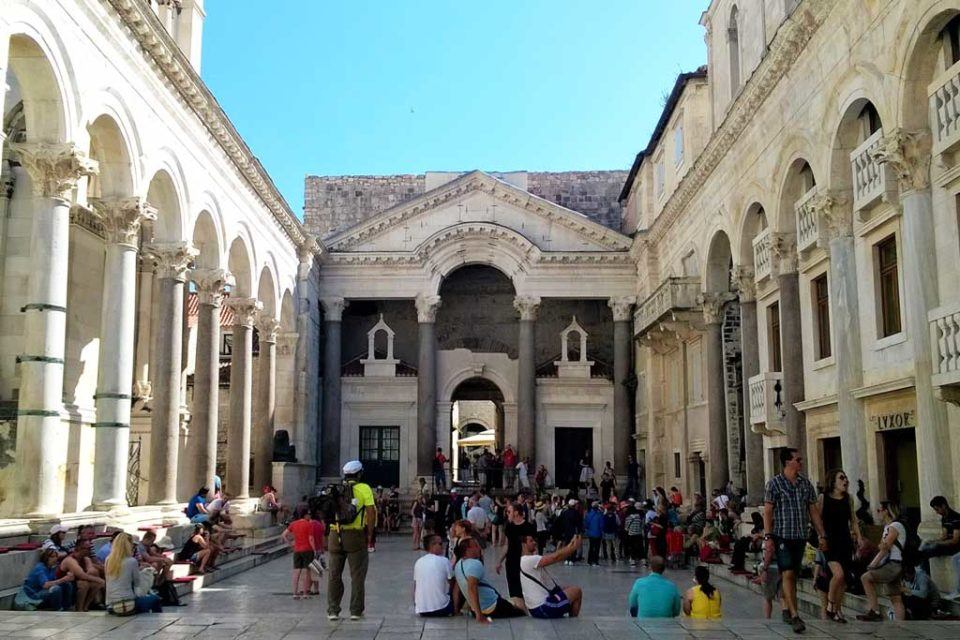 Dine and Shop in Split

While in Split, be sure to visit a traditional Croatian Konoba, a tavern where you can dine on local dishes. These include freshly caught sea bass, tuna steaks and sardines paired with local wines. For low-budget lunches, you can’t go wrong at a Croatian bakery where you can pick up cheap savoury and sweet pastries. Pizza is also a Croatian specialty given the country’s Italian roots and there are gelato shops everywhere.

Shop at the Green Market on the eastern side of the Old Town for fruit and veg. Here you’ll find piles of fresh cherries and peaches as well as souvenirs like local honey, lavender, crafts, and knickknacks.

Hopefully, this article has given you loads of ideas on things to do in Split Croatia.

Adventure in You Recommendations: Where to Stay in Split

Known as a stopover point for tourists to take a ferry to nearby Mediterranean islands, Split gained notoriety when one of its popular attractions became the filming set for HBO’s award-winning series “Game of Thrones.” Check out our top recommendations when planning a trip to one of the hottest travel destinations in Croatia.

Luxury Lidija Rooms – This property is just five minutes away from the popular main streets of Split and close to Diocletian’s Palace (Daenarys’ throne room in the series). The rooms are luxurious, well decorated and immaculately clean. The host is quite lovely, and is willing to store your luggage and share the best things to see and do in Split ahead of your check-in time.

Apartman Evi – Apartman Evi is quite clean, cozy, and roomy, featuring white fabrics and wooden furnishings. The great thing about this property is that it is both accessible to Bacvice Beach (5 minutes) and the Joker Shopping Centre. Although it is a bit far from the city center, you can always take the number 15 bus, which is also nearby.

Apartment Tina – If you’re a water baby, then book a room at this property. This modern, two-bedroom apartment with garden and private parking is just across the beach, and is great for a small family or group of friends. There’s a grocery store next to the apartment for immediate needs. Apartment Tina is 2.1 km away from the city center and 7km away from Diocletian’s Palace.

Adriatic Apartments – Another great, modern apartment property in Split, Adriatic Apartments has units that come with free parking, a balcony and garden views. A supermarket is conveniently located just opposite the apartment. You can always explore the nearby beach or talk a leisure walk to the city center, which is 15 minutes away.

Luxury Apartment Luce – This chic, luxurious apartment is just a 4-minute walk to Bacvice Beach and is close to some of Split’s popular attractions, including Diocletian’s Palace. If you have disabled company, request for a lower-floor unit as the upper floor units are only accessible by stairs. The host also offers a vegetarian option for its continental breakfast.

Apartments Deja Views – This modern property features amazing views of the pebbly beach across from a private balcony. The units feature an open-plan living, dining and kitchen area with complete furniture and appliances. There is a local restaurant just 30 meters from the property if you prefer to eat out. The main bus and train stations are a short walk away. Do explore Marjan Forest nearby, which has several hiking paths.

Want more travel inspiration? Check out our other articles on Europe

Amy is a freelance writer and full-time traveller who has been exploring the world with her partner since 2013. Her adventures include teaching English in Vietnam, volunteering in the Philippines and trekking to Everest Base Camp. Amy loves to blog about her travel experiences and encourage others to make their travel dreams a reality.