Hands down, one of the best experiences that we had during our Croatia family trip was the day we spent sailing around the surrounding islands of Dubrovnik. Given that Croatia was such a picturesque destination, we knew that we needed to spend at least a day going to the nearby islands.

We went on Google and found Dubrovnik Boats, a company who prides itself in creating exclusive tailor-made trips around the islands of Dubrovnik. I combed through their list of reviews online and decided to believe the hundreds of raving customers who claim that it was one of the best boat experiences ever.

Being that Tom’s family flew in from all over the world to meet us and we wanted to spend as much quality time with them as we could so we opted for a private tour as after all, “we were only in Croatia once!”

With that in mind, we contacted them and arranged for a fun day trip around the islands of Dubrovnik. 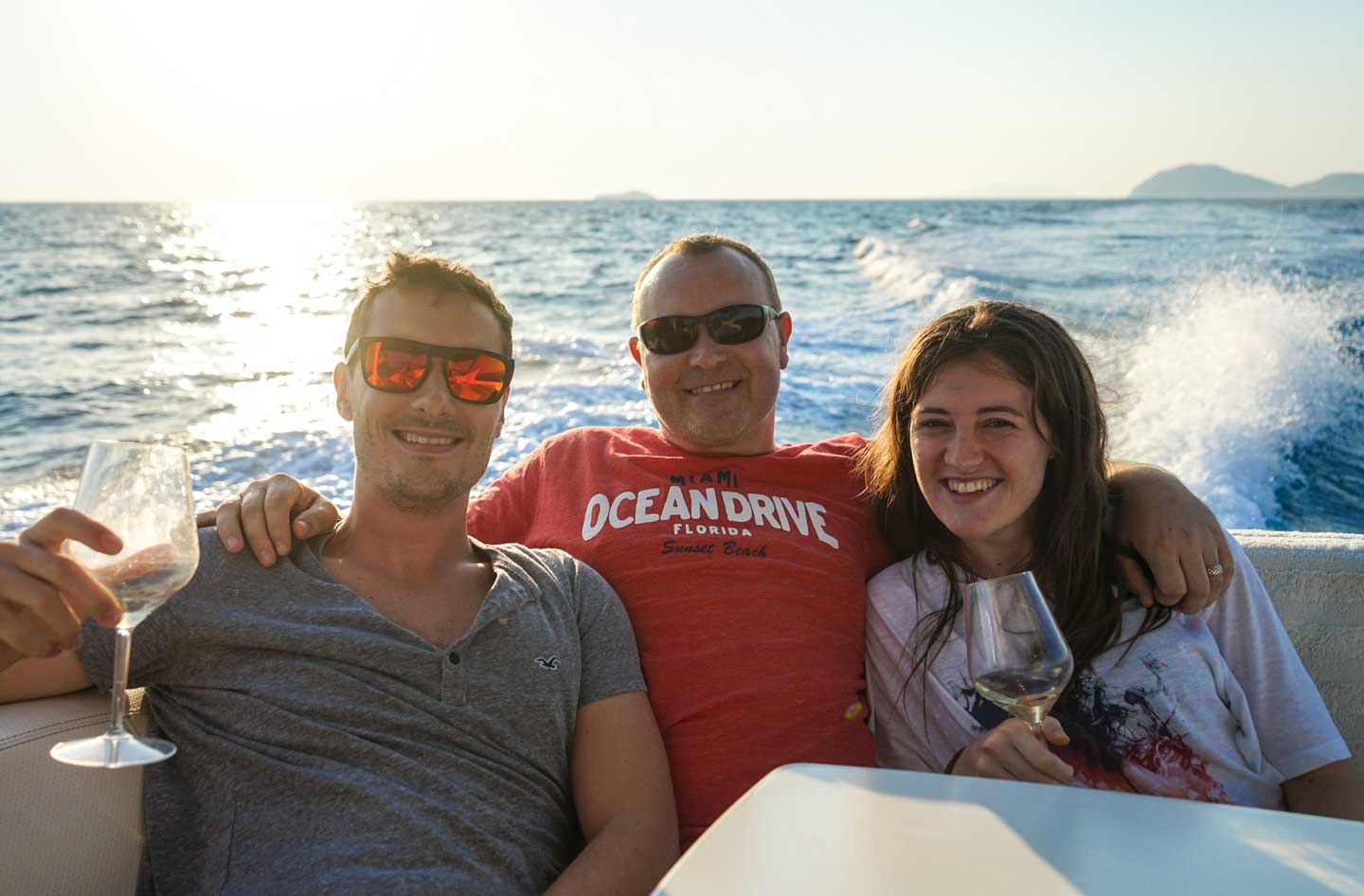 The thing that makes the entire experience with Dubrovnik Boats is their dedication to cater to your needs. As soon as we met our skipper, we were briefed on the ins and outs of the boat and together, planned an itinerary based on what we wanted to see.

This made all the difference in the world as we felt like unlike most tours, we had a say in what we wanted to see based on our interest. The company itself was professional at all times, sending us confirmation vouchers, a map to meet them, and a list of things to bring. Everything was very highly organized and was professionally handled.

Whilst we opted to do the speedboat tour around Elaphite Islands and the Old Town, they have other tours that can take you to the Island of Mljet, Korčula and Pelješac, as well as trips to other nearby islands. Dubrovnik Boats have a fleet of speedboats, catamarans, luxury motor yachts, and sailing boats so you can take your pick on which type of boat you want to explore the islands with. 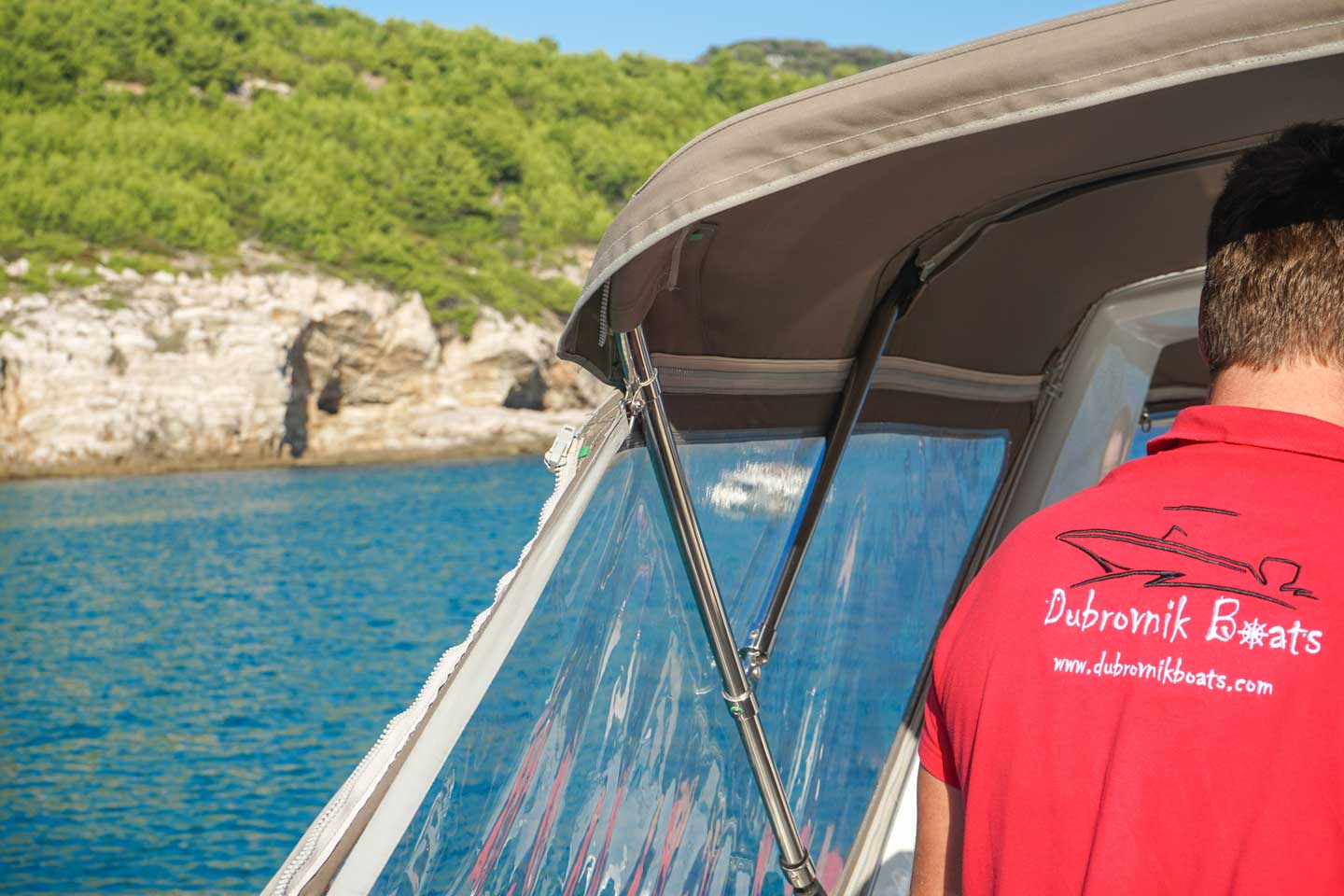 As mentioned, we started our day off with our captain, Tom, explaining the ins and outs of our boat. We spent the day on the JEANNEAU Leader 8, a speedboat which was designed to fit eight people. The boat itself was beautiful and was obviously well maintained.

As soon as we entered, we settled ourselves in the outdoor seating area but also noticed the downstairs cabin which had another seating area, a bathroom, and a small kitchen. During our tour, we also had wine, water, beers, and other beverages available throughout the trip.

We left Port Gruz just after lunch and began our trip towards The Elaphiti Islands. Located Northwest of the city of Dubrovnik, these islands form an archipelago set in the Adriatic Sea. There are three main islands, Sipan, Lopud, Koločep, and a handful of other smaller islands. While some of the islands are inhabited, our skipper mentioned that more and more people are opting to move to the main cities and rent out their homes to vacationers. 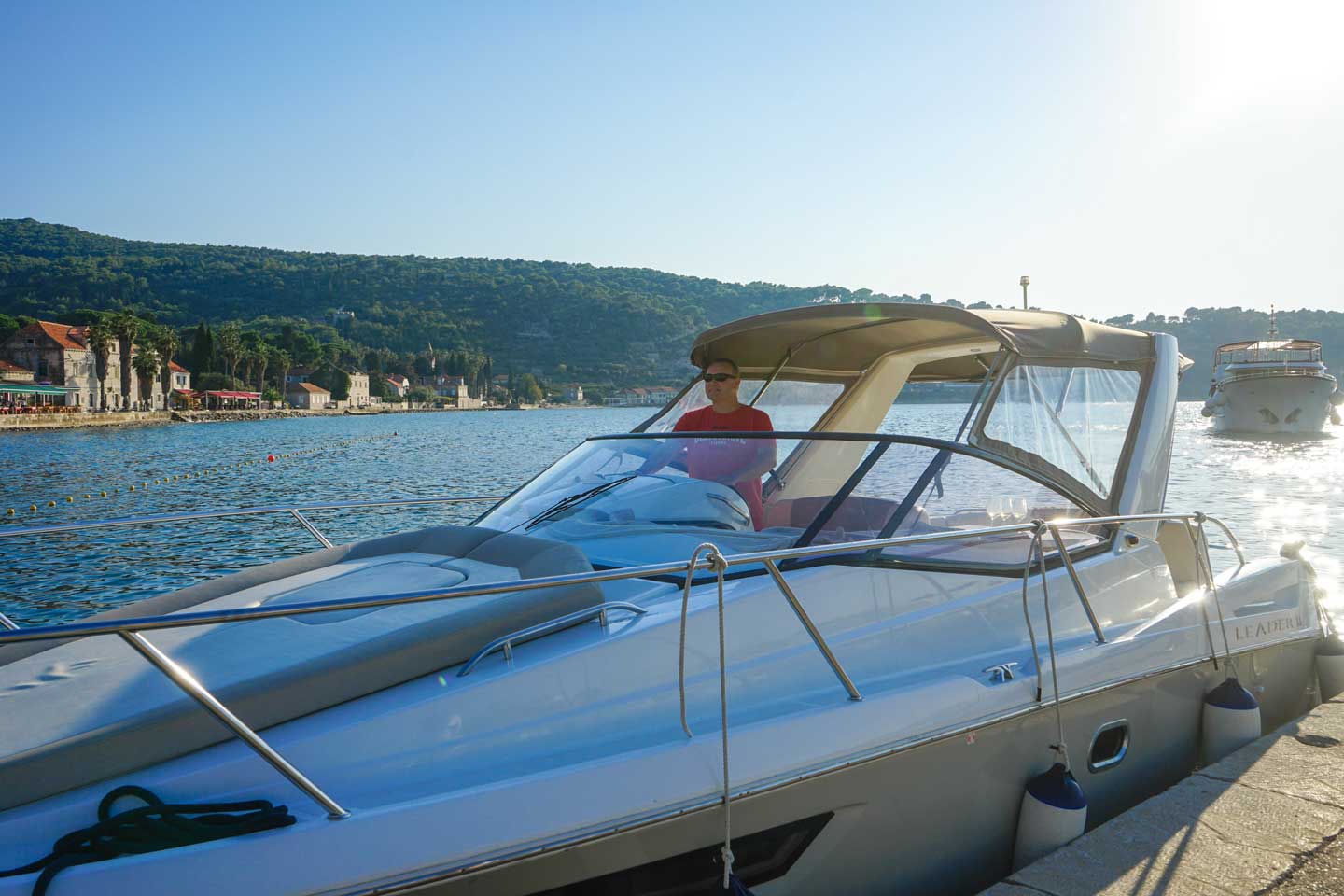 Tom’s Dad, Andy with our beautiful boat for the day

One of the best parts of the entire trip was being able to go to the small little caves and caverns which the Elaphiti Islands are known for. In one of our first stops, as we anchored our boat, our skipper filled us in about the area and what we can expect to find. As there were other boats during this time, we assumed that it was a popular spot worth seeing.

Tom, our skipper told us that this particular spot was popular because of the Blue Caves. The white sand reflected the ocean and completely lit up the cave. As soon as we swam in, we were surprised at how blue the cave really was. The guys at Dubrovnik Boats even provided us with a Go Pro camera which we could take underwater. We used this to snap a few photos of us underwater which came out great!

Apart from the blue cave, we also went around a few more islands as our skipper expertly maneuvered us around to see some other interesting rock formations and caves. 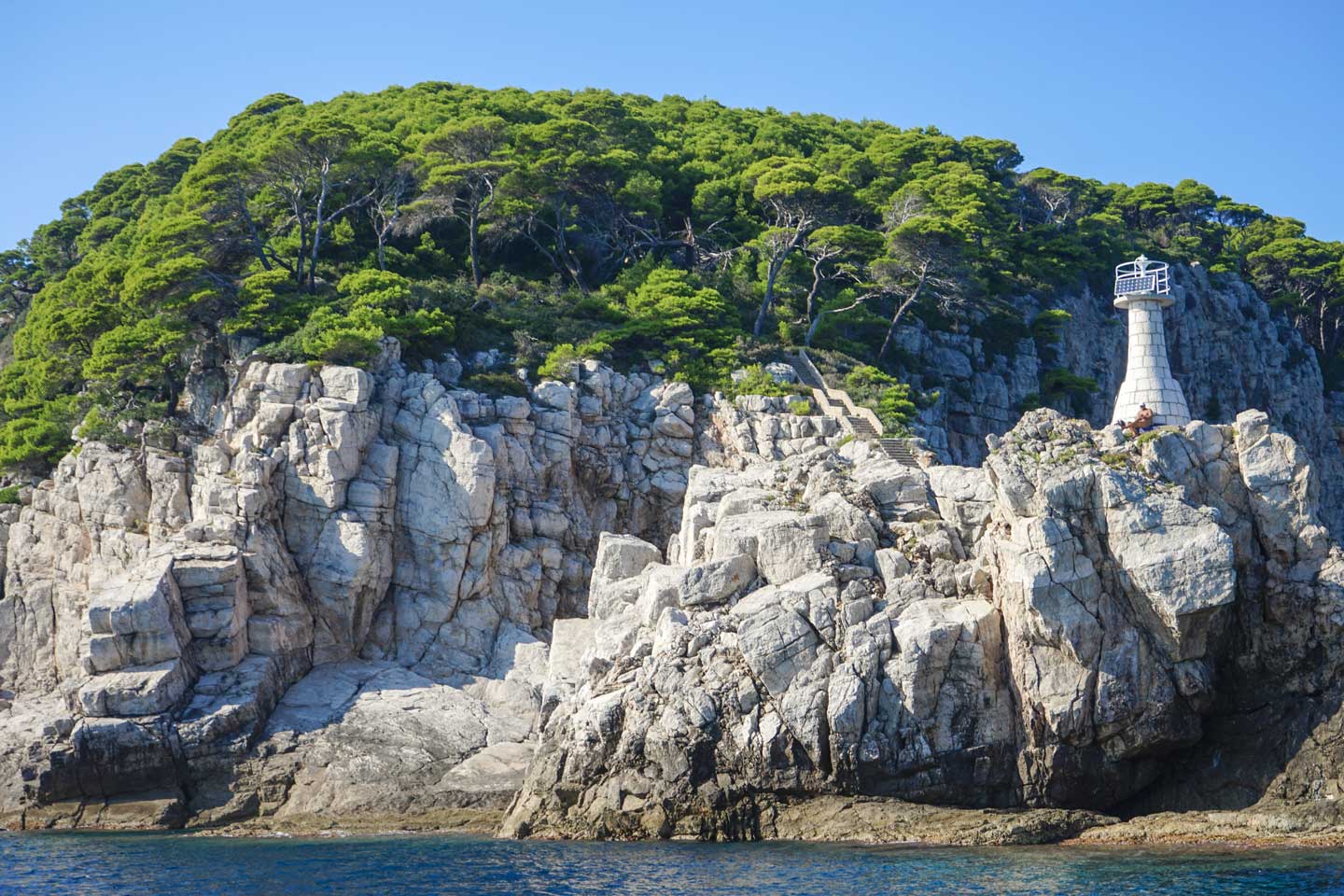 Our next stop was to one of the only sandy beaches in Dubrovnik (most of their beaches are rocky) which is located on Lopud Island. Although we didn’t swim to shore, we happily jumped in and out of our boat, enjoying the relatively warm, clear blue waters.

The island of Lopud is a fairly popular island which has a few restaurants, shops, and hotels. After swimming in the sandy beach, we docked on the other side of the island where we wandered around town in search of some gelato. 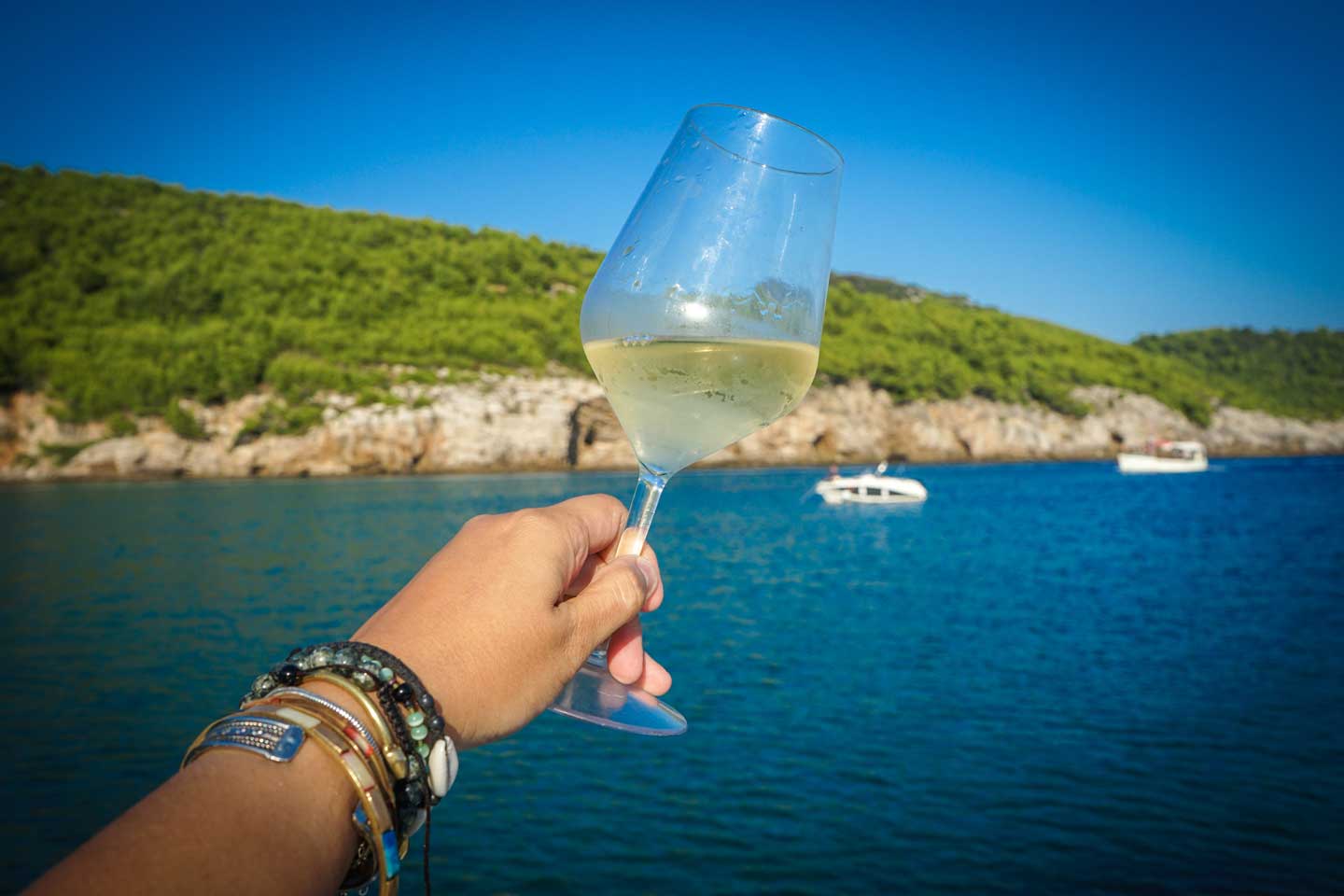 Enjoying our Croatian white wine which was fantastic!

After a few more stops around the Elaphiti Islands, we headed towards Dubrovnik Old Town as we knew we had to see this place from the sea. True enough, as the sun started to set, we saw the sky change into various shades of orange and purple.

This in contrast to the towering walls and buildings created a perfect backdrop for the sunset. Driving around the old town and hearing directly from our skipper how much the Old Town has changed since the war was really special.

We then drove to the perfect spot where we turned off the engine and peacefully enjoyed the sun go down the Adriatic Sea. During all of this, we had bottles of beer and wine to share and was overall just a fantastic day out at sea with some of the people that we love the most. 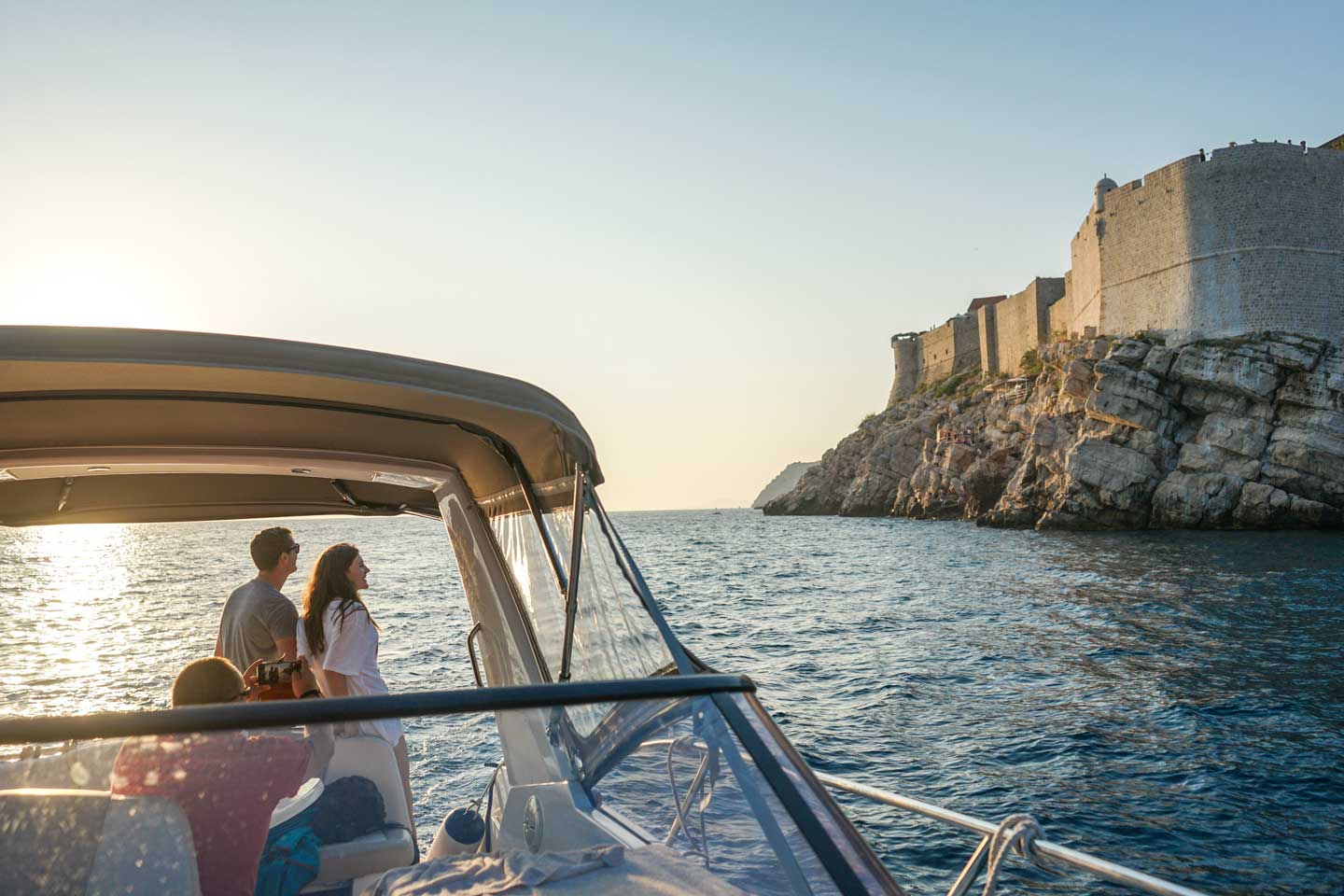 We were pleasantly surprised at the entire trip and was blown away by the service that the guys at Dubrovnik Boats gave.

Included with our tour were the speedboat, a skipper, white wine, beer, water, and other beverages. We also got to use their snorkeling equipment, towels, blankets when we got cold and had access to their surround sound where we could play our music.

As mentioned earlier, they also let us use their Go Pro so we could take underwater shots during our water excursions. Although we have a Go Pro of our own, I opted not to bring it as I wanted to take a sample of how awesome their camera is and what type of shots you can get using it.

At the end of our boat trip, they also gave us the SD card which was in the Go Pro so we could have a copy of the photos that we took that day. 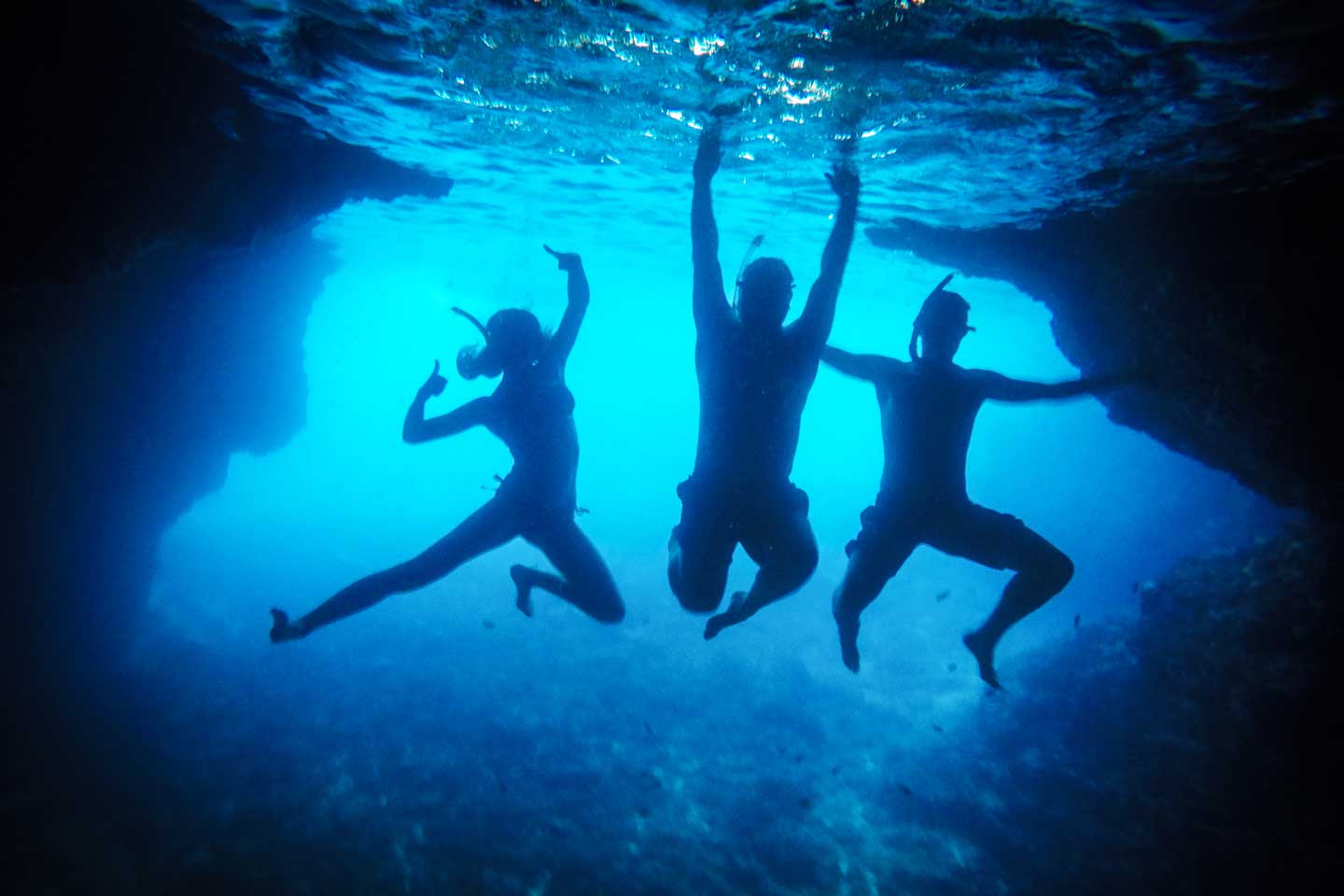 Taken with their Go Pro Camera

The entire day from start to finish was fantastic and we couldn’t have asked for a better experience. The islands around Dubrovnik are very beautiful and are well worth visiting! Being able to spend time with family and creating unforgettable memories like this is at the core of why Tom and I do what we do and this particular memory is something we will always remember.

If you’re heading to Dubrovnik, I can’t recommend this activity enough!

For more information, head on over to the website of Dubrovnik Boats

Looking for more articles on Europe? Take a look at a few of our best ones 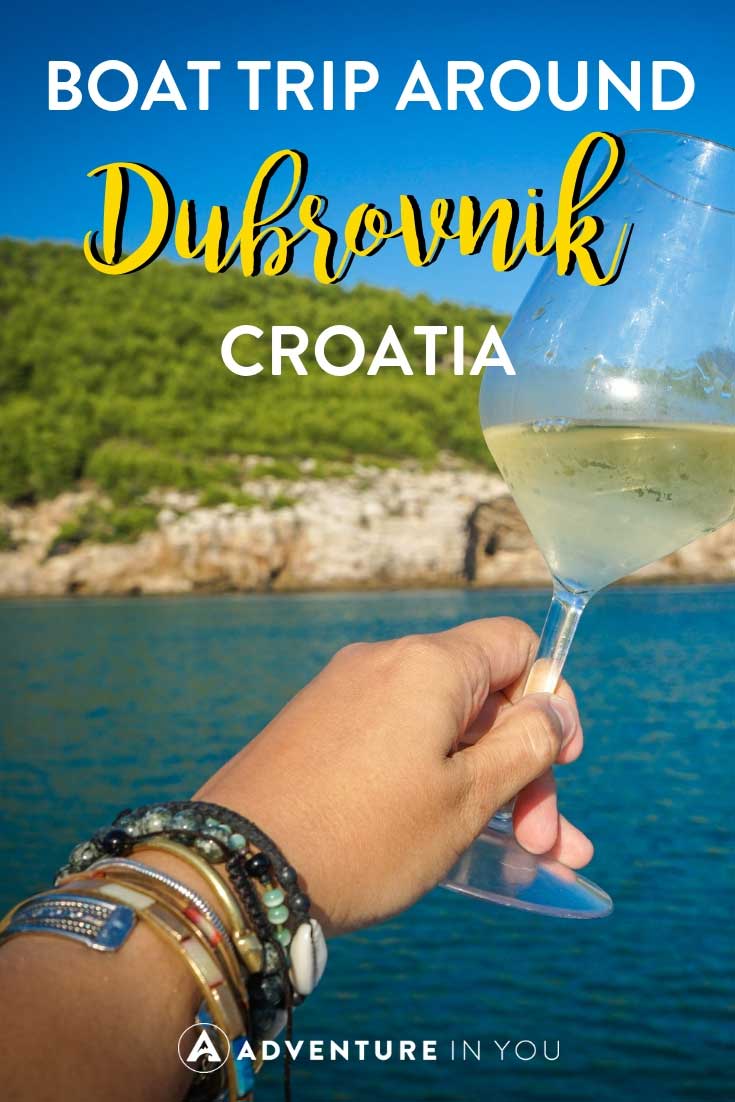