Meet the Woman Who Paints People All over the World

For our People of the World this week, we are featuring an adventurer that is traveling the world inspired by her craft,painting human bodies. Orly Faya’s work is so unique and captivating that we couldn’t help asking her what inspired her creations. Meet this beautiful soul whose love for travel and life can be seen in her art.

Tell us a bit about yourself?

My name is Orly Faya, and I was born in Sydney Australia, but quickly discovered my way into the wider world and have been travelling ever since. I painted since I was little but took a detour to study law and anthropology, and now my passions go together as I paint people from all over the world into places all over the world. (Previous Interview: Proving anything is possible meet IamAileen) 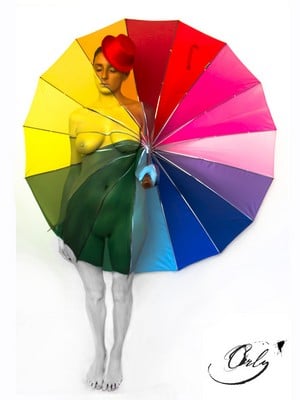 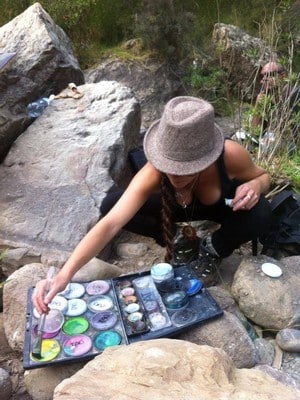 How and why did you get into doing body art?

I had been painting kids faces for years before I even considered painting a body… One day I saw a photo of my friend body painted as a zebra! I was so impressed that I made a comment on the image that said something along the lines of “WOW! I want to paint like that!” to which the artist simply told me to go for it! I was struck by the possibility and it didn’t take me long before I dived into the art of body painting. I entered a body painting competition almost immediately and unsuspectingly won second place and people choice awards. That was about 5 years ago, and its been a upward spiral ever since. I love to paint and I love the human body and the combination never ceases to blow me away. 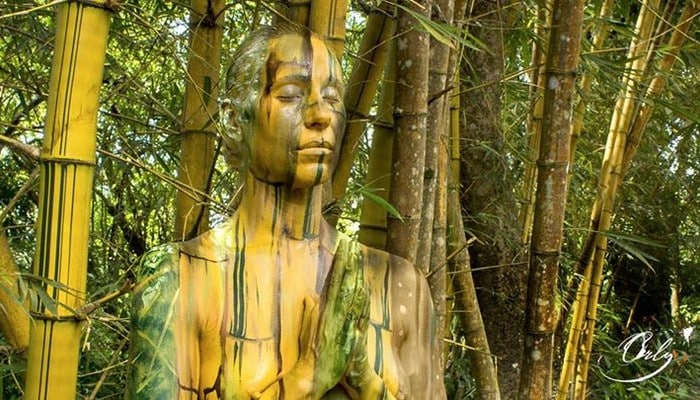 What have your travels inspired you to paint?

My travels inspire me to no end, painting and otherwise. I am endlessly inspired by the ultimate art of nature, including the diversity and beauty of humanity that is told through experiencing different cultures and lands. I am somewhat obsessed of painting people into land. Every beautiful sight I see causes me to reel with desperation to mimic its three dimensional beauty onto a unique human canvas. The infinite expressions flood my imagination and I cannot imagine getting tired of this practise.

What is the biggest lesson that traveling has taught you?

I have learnt countless of priceless lessons. Once upon a time, 13 years ago when I first left Aussie shores on my own, my mama told me “just remember, everyone you meet is there to offer you something – a message, a lesson.” and this was the start of my journey, understanding the meaning and purpose of every step, each chosen direction being guided by my higher self. One of the biggest lesson learnt from long term travel is that we take ourselves with us wherever we go. Every experience in life is a reflection of self and nothing is just what it seems – rather, the way life occurs to us is an insight into one’s self rather than a true comment on what is being seen or experienced. (READ: 5 Things I Learned from Traveling) 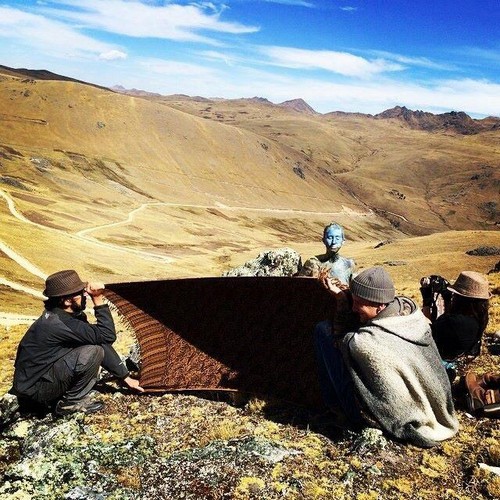 What is the most adventurous body paint merge you have produced so far?

I guess one of the most adventurous merges was at Indian Nose Guatemala. The couple, wolf and Ginou, had me as a guest in their home, and as an offer of my gratitude, we planned our painting merge session. They were dreaming of being painted into the view and so we worked out a good mountain to climb and set the date. On the day of the adventure, we had two tuktuk’s take us an hour up the mountain. One of the tuktuks left us hanging half way up and we had to all jump in the one and squish together to get there. As you can imagine, nudity in Guatemala isn’t exactly acceptable – so having another person there to ‘hold space’ and ensure the privacy was really important. On the day of the shoot, we still had no one to come with us, so we took the risk and asked the 16 year old local tuktuk driver if he would be our chaperon (little did he know exactly what his role was going to be… but we were certain he would enjoy the experience!) and we paid him accordingly. At the point which we could go no further in the tuktuk, we began the climb. Up and up and up and up – often the case as the best views are from up high.

Backpacks full of equipment, we bounded up as fast as we could, so not to lose light. An hour later, we arrived to the top only to find a white misty sky with absolutely no visibility at all! It was impossible to merge with the view, for there was none, so we sat for a while and waited. Ginou ran around looking for ‘perspective’, into the forest she went calling out “What about here?!”. I followed her in to look around and eventually I saw it. Boom! “Ok I said! Lets do it!” Off came the clothes and I began. 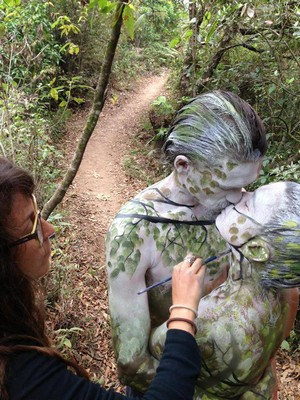 They stood on a hill, their ankles bent in uncomfortable ways to capture the angle, the cold sunk into their bones as they held onto one another and breathed warmth into each others face. I painted in a frantic but calm manner, whilst the young Guatemalan boy stood guard. He was probably the happiest kid in the world at that time. Two hours passed and they shook with cold. It was time to stop. And we had done it! 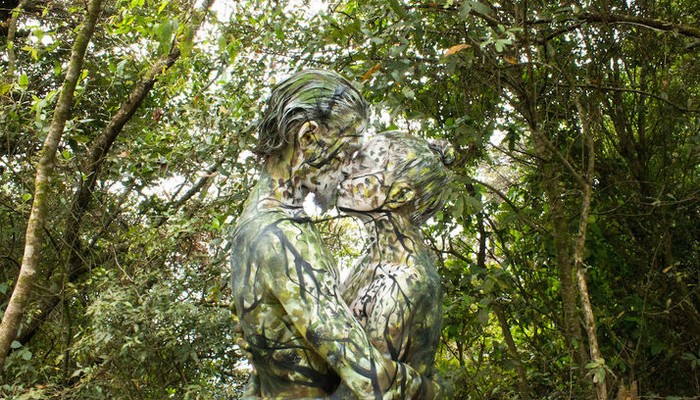 What inspires you to travel? what do you love most about travelling?

I originally left Australia after I finished high school because I was inspired to leave Australia! Brought up on the north shore of Sydney, I did not feel a sense of belonging and I felt relief from the moment I flew out into the expansive world of possibilities at the age of 18. I kept going over the years because Israel, india, and Peru all became very much my other homes and my anthropology degree allowed me to dive deep into an understanding of “culture”.

Though other places can often feel more like home, at the moment I have decided to based myself in Australia, to grow roots and learn about what it means to be Australian. I had a vision of painting people into the lands of Australia, and the vision quickly expanded into a project called “Painting the Spirit of Oz”; an expression that tells stories through body painting merging sessions combined with media interviews that tell the stories of the people of this land and why we want to reconnect with the mother, with source. 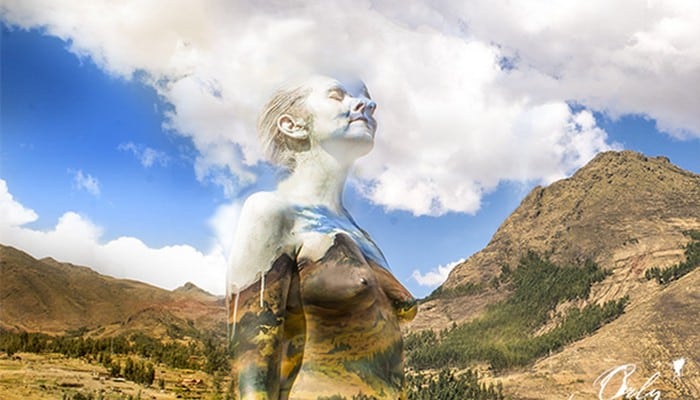 What is the most difficult challenging experience that you have ever gone through?

Wow. I have been through some crazy experiences… Many. I think that one of my first really challenging experiences was my first time in India. I was lucky to have my older sister and her boyfriend meet me at the airport. We spent two weeks travelling around together until they needed to go to Sri Lanka to renew their visas and I had decided to travel 36 hours to Goa… on my own for the first time. That night, I had the worst food poisoning I had ever had, – the works! So bad that I passed out in the bathroom (have had low pressure since a little kid and have always passed out very easily) and smashed my face up – cut my lip right down the middle so I couldn’t smile… in India. I looked like I had been hit. What had I done to deserve it was written across the foreheads of many… needless to say, it was a very long journey. (READ: Things I Learned from being a Solo Woman Traveler) 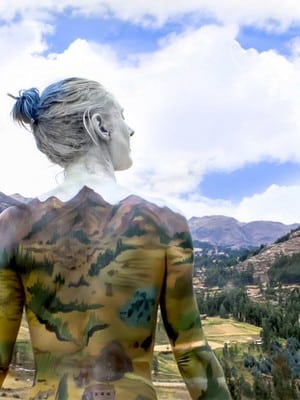 Where are your adventures taking you next?

Having been on massive adventures for the most-part of the last 13 years, I’m actually aspiring to stay here in Australia for some time before heading out into the world again! Its time to consolidate and nurture myself and the projects that I have begun. I have many plans for touring with my work, using many modalities of creative expression to story tell and impart important messages through creative expression, both individually and synthetically. Since being in Australia, I have started another initiative called Creation’s Calling, which is a multi platform for conscious and measurably impactful festivals, harnessing creative powers for activism, making ripples of transformation in every creative way imaginable. Between that and “Painting the spirit of Oz” I will probably be here for a while. I guess only time will tell when and where I will fly to next, but I have many dreams and ideas… and the adventure of making a family sometime would be spectacular also. Nothing is certain. Everything is possible. And that’s the only thing we can really be sure of. 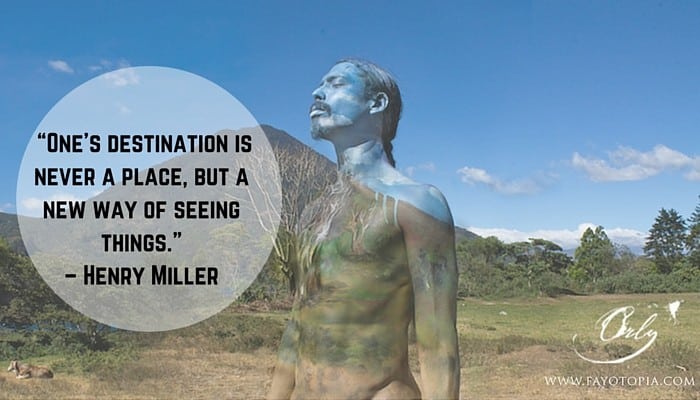 Check out this amazing video on Disappearing into Nature, if you want to find out more!

Orly Faya is an internationally recognised award winning body painter, speaker and multi disciplinary artist. Born in Australia with Scotland, Polish and Israeli roots, she spent the majority of her adult life travelling and living in various continents, now a creature of the world. With a background in anthropology, graphics and media, Orly aspires to create ripples of TRANSFORMATION through combining creative expressions with technology. Orly Faya currently specialises in going to remote locations to paint people into the landscapes of the world and exhibits photographic artworks along side the stories of transformation. As the founder of CreationsCalling.org and www.orlyfaya.com, Orly’s intention is to inspire creative activism and make measurable differences whilst helping humanity remember the